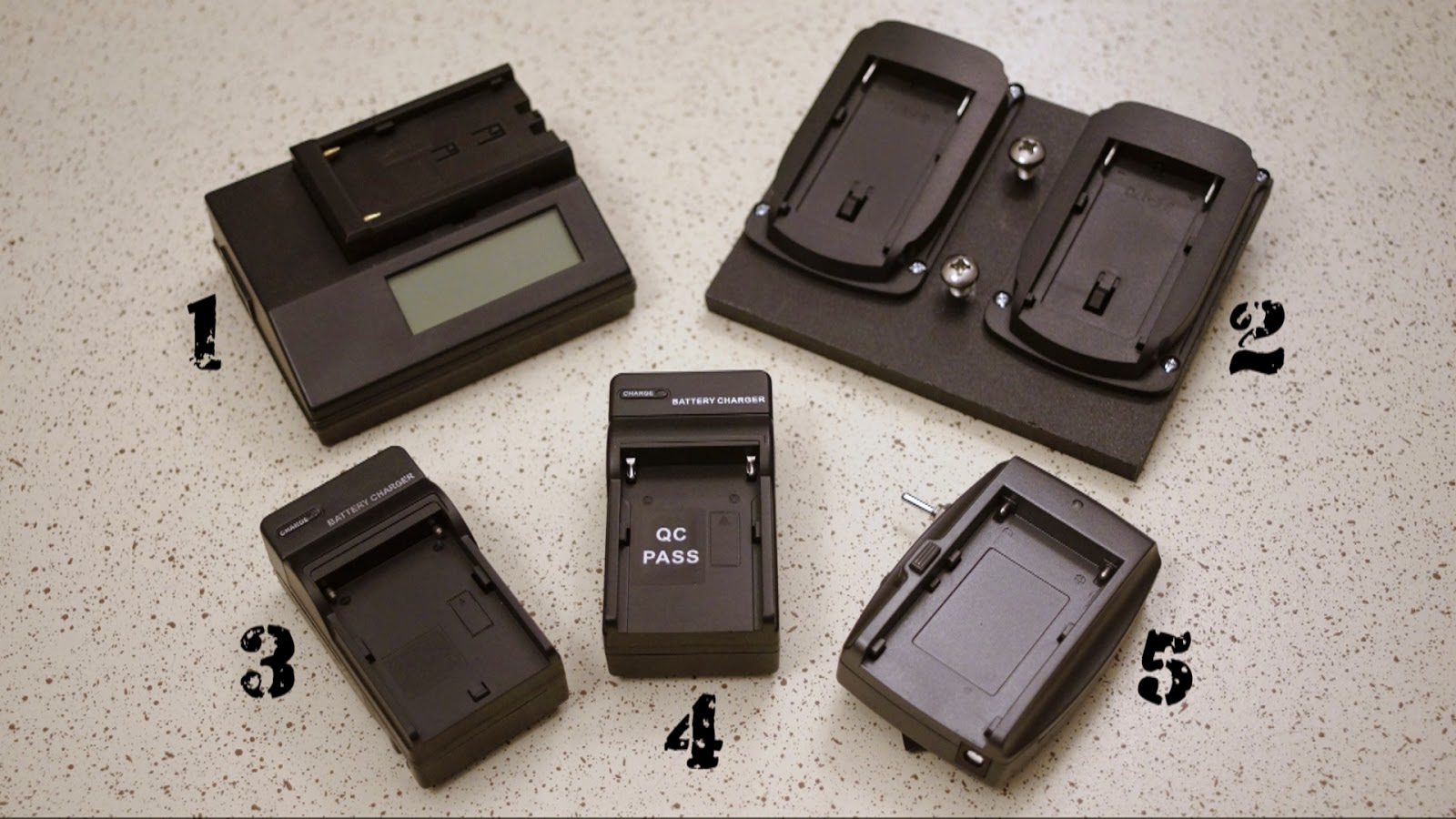 In case you didn't know, I really like Sony NP-F Series batteries. These were first developed for the original Sony camcorder (VX1000) that ushered in the digital revolution with the first firewire port. These batteries have hung around long after the obsolescence of those cameras and are a very common way to power all kinds of stuff using readily available battery plates. I use these batteries to externally power my camera and 7" monitor, but they power all kinds of stuff.

Emm over at Cheesycam recently had an cool post about using the removable plates from cheap NP-F battery chargers as battery plates to power your gear. I like this idea, but after using several forms of plates and chargers, thought I would chime in about what to watch out for when buying these frugal items on sites like Amazon and ebay.

The main issue with some of these plates are the battery posts. These are the contact tabs or pins that rest inside of the battery's positive and negative connections. It's the access point of power that runs the juice from the battery to whatever you have connected to it.

The second issue is the number of plastic tabs that hold the battery to the plate. The cheaper, shorter ones only hold the battery by two points of contact. The better, longer models have four points and a longer base for the battery to rest. The short platforms aren't really an issue if the plate is laid flat, but when vertical, the battery can fall out. 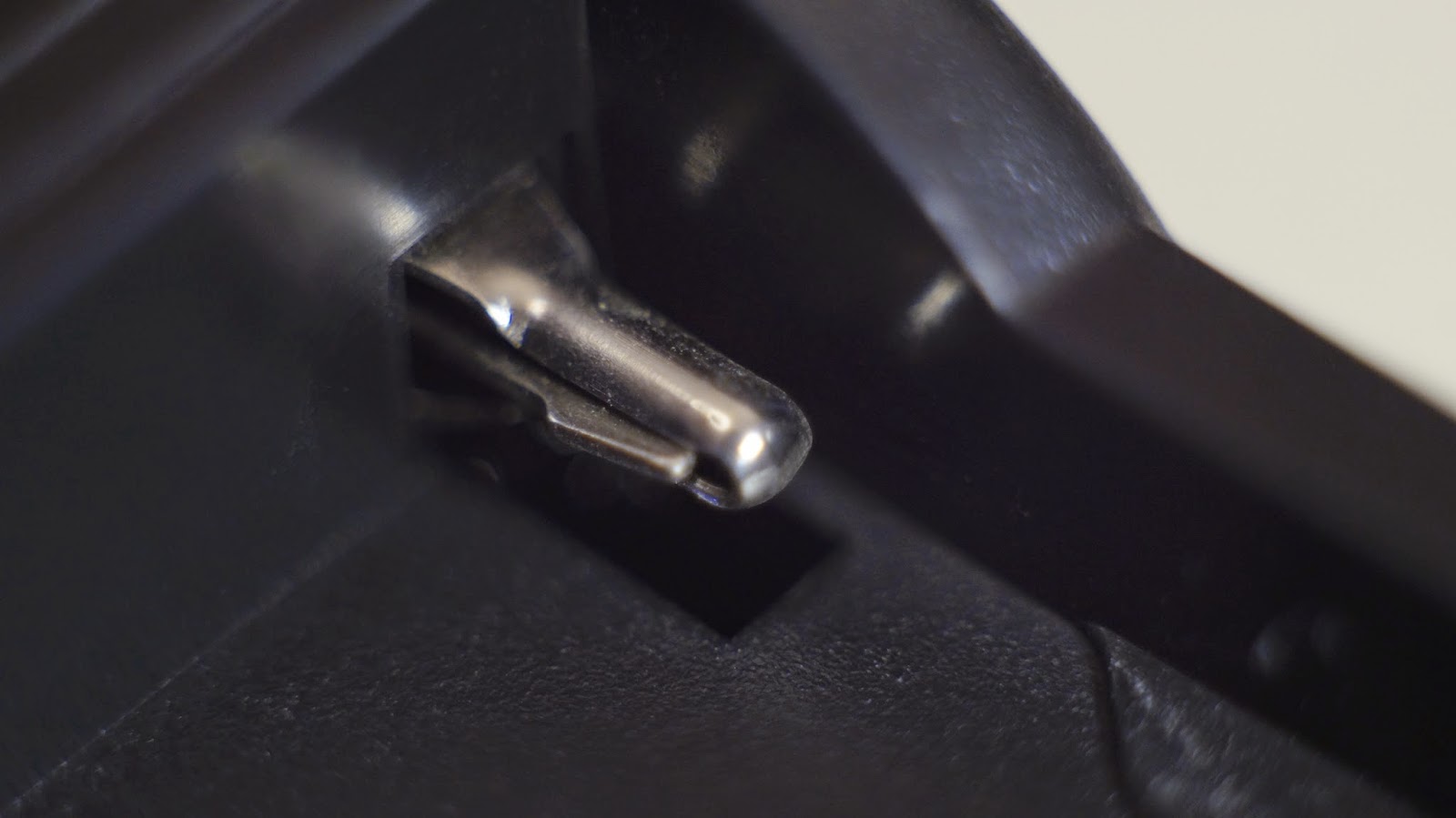 This is the most common type of battery tab found on cheap chargers (item 4). The tabs are a fixed, very flimsy metal that is easily bent, so care should be taken when inserting the battery. The platform is also short which doesn't lend to vertical mounting. Since this is a charger made to plug into the wall, this is a bit precarious, as your battery can fall out if bumped. This is a much bigger issue if you are using the plate mounted on a camera rig. 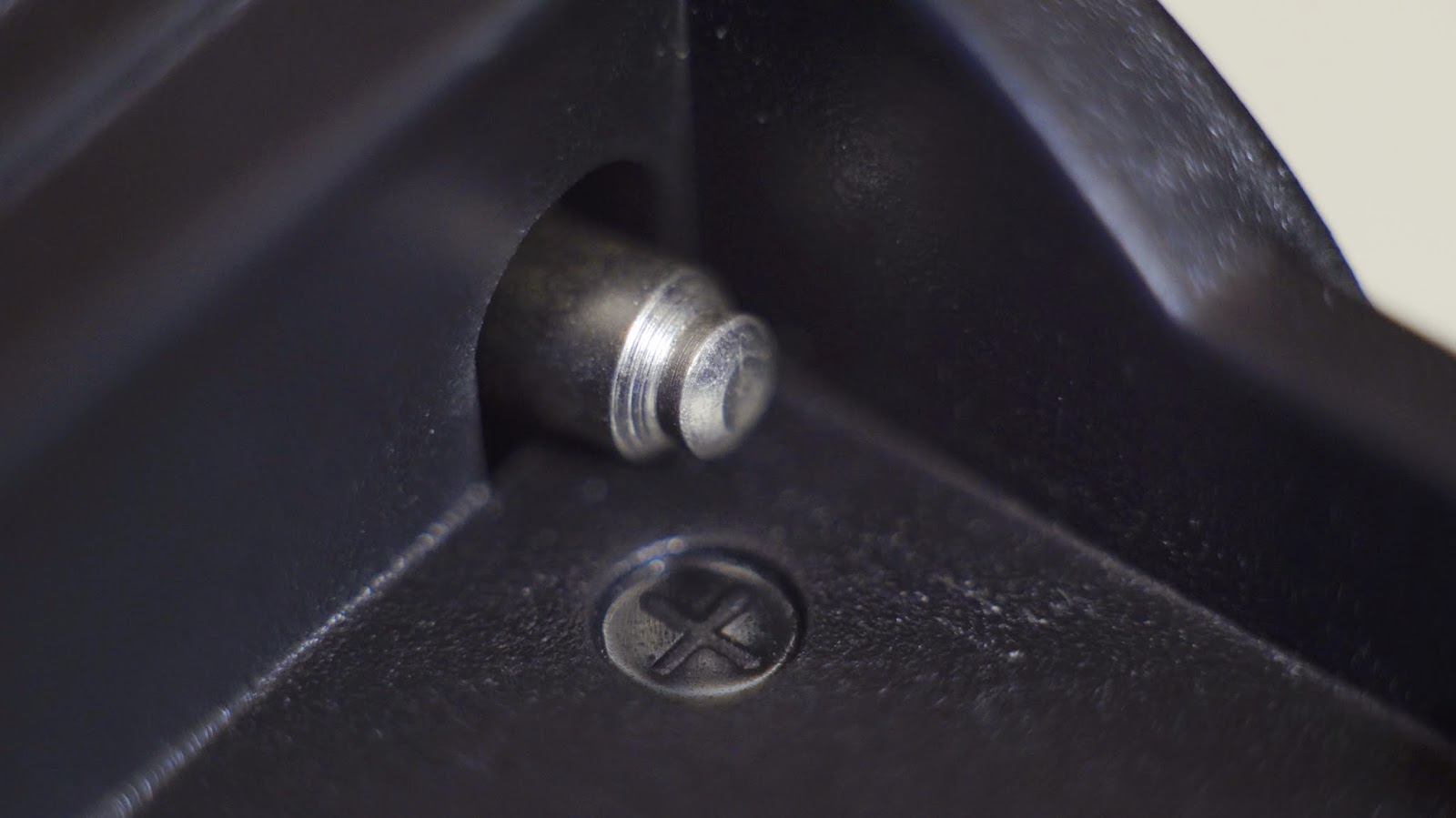 This is another short charger (item 3), but these fixed pins are a bit better. They are made of a solid piece of metal, but are very short. I can't see them going in very far into the positive and negative power wells of the battery, which means they may easily lose their connection. Like the previous charger, the plate is short and doesn't hold the battery well if mounted vertically. 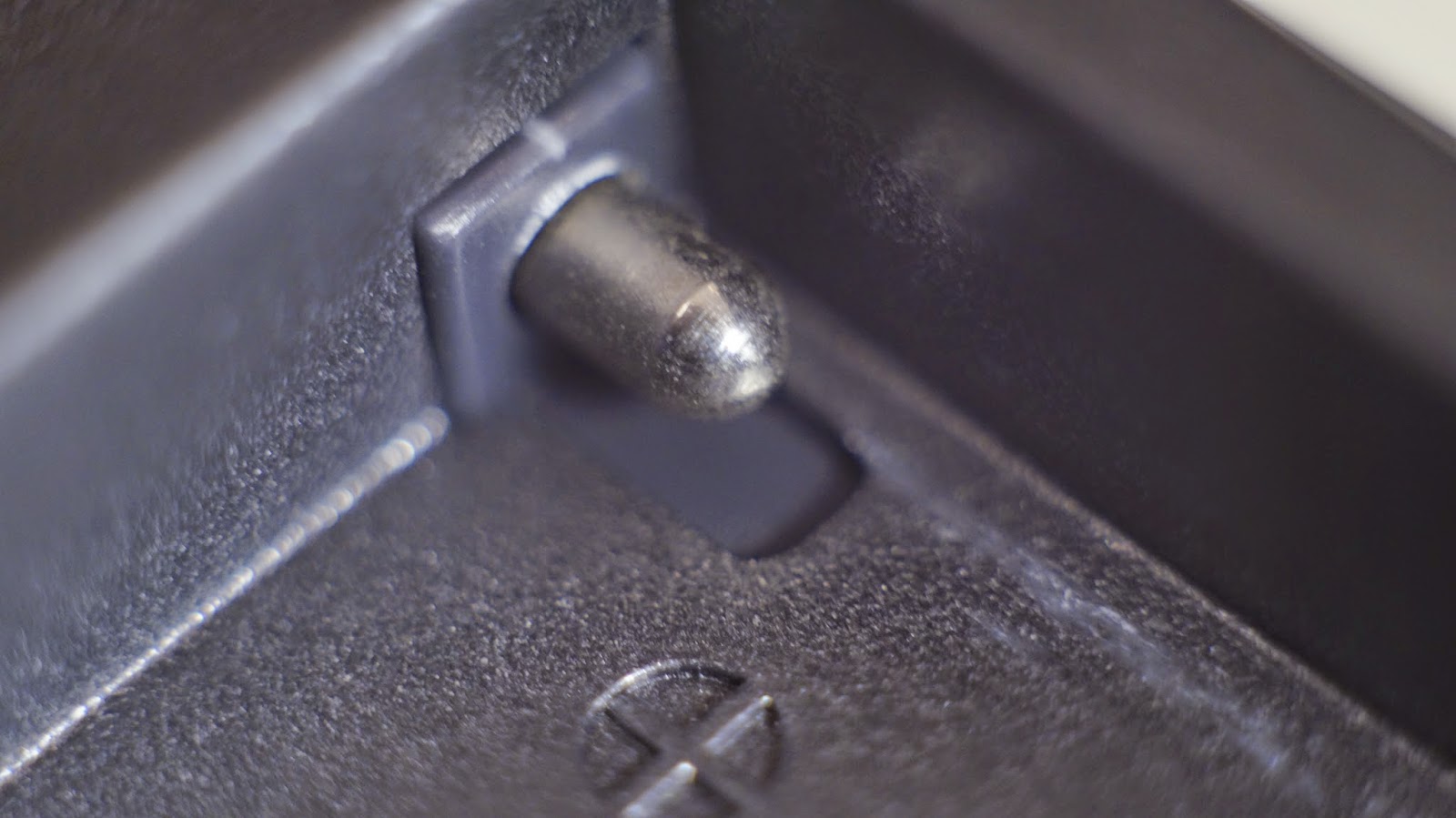 Things continue to improve with the battery cradle (item 5), which offers a lengthier pin, which springs back when pressed. While the cradle is just as short as the two cheap chargers, it has a locking mechanism that must be released for the battery to be removed. This makes the position of the cradle a non-issue. It also has several mounting options such as a removeable bracket and 1/4-20" self threading knob! This was the initial way I mounted my F970 batteries on the Frugal Cage. 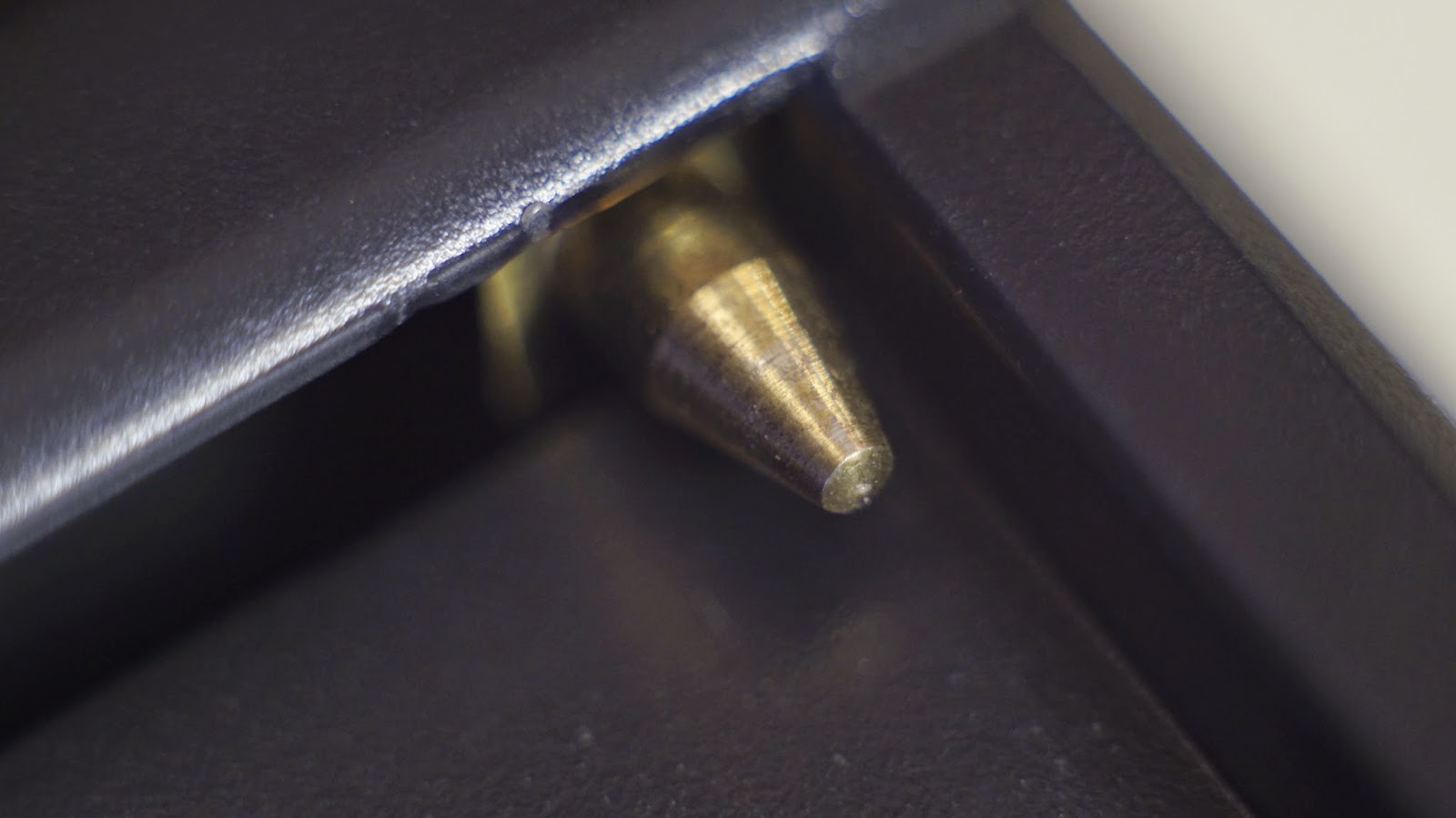 These are the pins found in the LCD charger (item 1). They appear to be made of a better material (brass?) and are also mounted on a spring. The mounting plate is long and holds the entire length of the battery on four tabs. This charger is meant to lay flat (it comes with a power cable instead of a built in plug), but holds the battery securely in any position. It also has an LCD screen which gives you charge percentage and voltage. It's the most expensive item on this list ($25), so I would expect it to be well made and it appears to be so. It's my preferred charger for the Sony NP-F battery series. 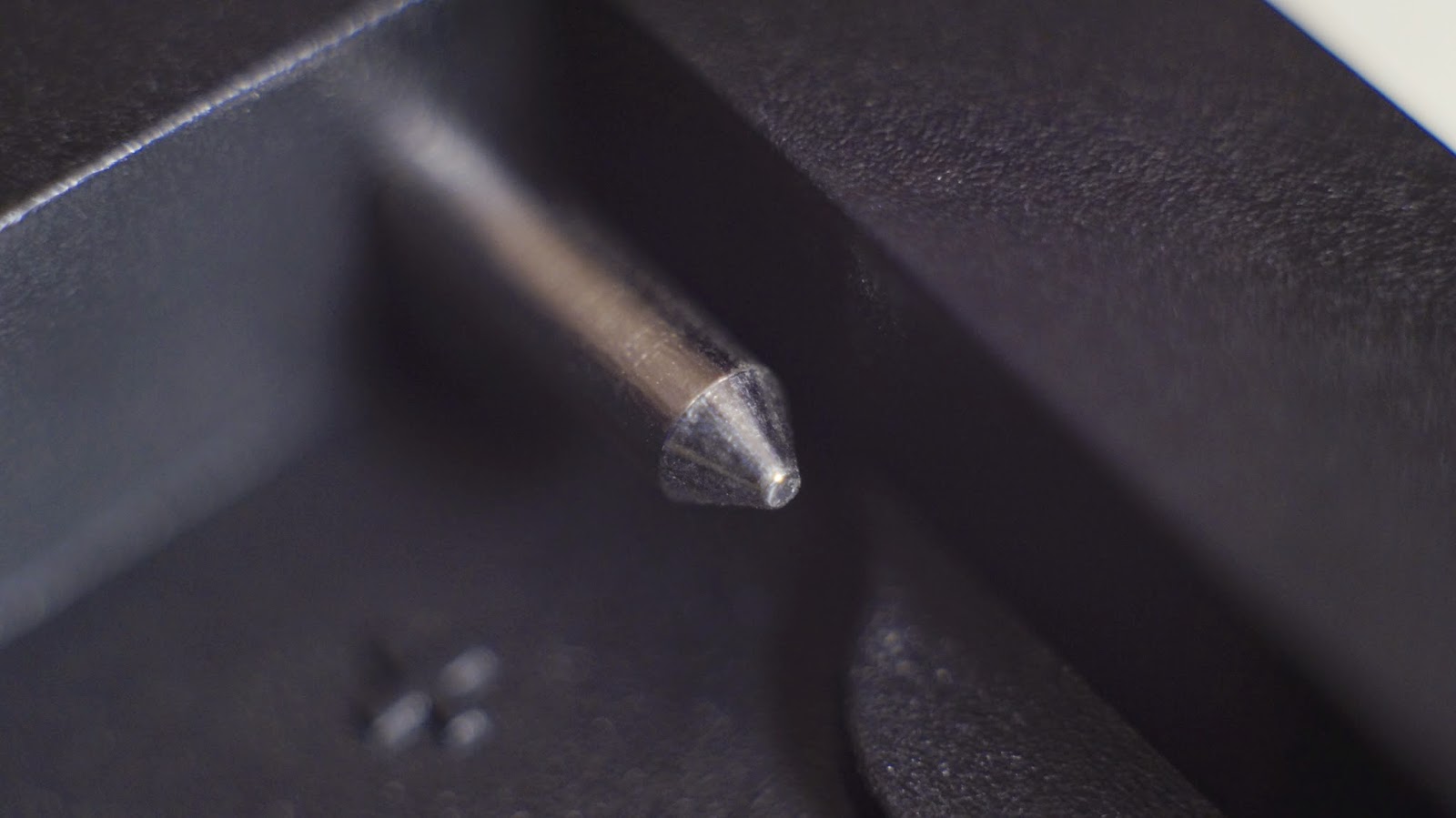 This the excellent battery plate found on eBay (item 2). It has everything: long, spring loaded, solid metal pins and a long base with four mounting tabs. It's the best plate I've found (that isn't ridiculous in price) and two of them currently reside on the Frugal Cage.

While I was pretty happy with the plate solutions I have been able to find (the only reason I upgraded from the cradle to the dual plate was stability and battery capacity), the cheap chargers have been a crap shoot. You never know what you're getting, despite the pictures shown. I've had several purchases that were for completely different batteries! Ugh.

Whatever you decide to do, I like the fact that there are lots of options for this very common and useful power source. These batteries are all over the place (I use the clone versions) and can be an affordable way to power your gear for a very long time in the field.  All you have to do is mount them.
Posted by Scott Eggleston