Since YouTube is such a huge resource for video content, I thought it might be good to be aware of new stuff when it gets uploaded. I read numerous blogs for information using an RSS (Real Simple Syndication) reader that lets me scan them all quickly. Wouldn't it be great if you could do the same with video?

After a bit of poking around I found a link that told me how to do just that. While there are several ways of finding what you are looking for based on tags, channels or keywords, I was most interested in new uploads relating to filmmaking. This is how you do it:

Just replace "filmmaking" with any key word you want and you will get the RSS feed you desire. Then just add it into your reader. It's that easy.
Posted by Scott Eggleston 1 comment:

If you need a very affordable light source, you can't go wrong with a clamp light. They don't cost much (about $6.50) and can use any light you can jam into a standard socket. They mount onto any narrow surface (shelf, chair), but if you need a more versatile place to clamp onto, check out last episode's PVC Light Stand.

Creative Extensions to the Stories I Tell
http://workbookproject.com/culturehacker/2010/04/20/creative-extensions-to-the-stories-i-tell/

How to Market Your Film: Getting Results on YouTube
http://heavybagmedia.com/blog/2010/04/14/how-to-market-film-getting-results-on-youtube

Controlling Exposure with a Fader ND
http://vimeo.com/10433983
Posted by Scott Eggleston No comments:

I just want to clarify something. I don't care what you spend on gear as long as your output looks and sounds good. Technique will always serve you in the end no matter what machinery you have at your disposal. I've been getting real excited lately about how good an image can get when lighting is actually part of pre-production instead of an afterthought. It doesn't matter that I'm using inexpensive hardware store lighting. What matters is where I put those lights and the end result, which is looking pretty dang good in my opinion.

It's a common point of discussion on some forums about how you can't show up to a client shoot with DIY gear. You'll get the raised eyebrow and potentially lose work, even if your sound and picture are superior. This may be true (and may not depending on if the client knows your reel), which may require you to "snazz up" your equipment. I know my Canon HFS100 looks a lot more impressive as a camera if it has a lens hood and XLR box attached. It is still small, but not as small as when it's stripped to its birthday suit.

On your own film shoot, of course, there are no rules. It's your set and you can do anything you wish. You may even impress people when they see the contraptions you've created to get "that" shot. Okay, the only people you will probably impress will be those in your same (or below) budget level, but that's okay. I'd rather hang out with those people anyway.
Posted by Scott Eggleston 3 comments: 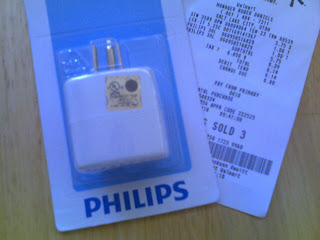 Today I stopped into Wal-Mart to pick up a couple of cube taps for my light kit. A cube tap is a block-shaped outlet expander that turns one electrical outlet into three. They are very handy and compact as well. I went to Wally World because they sell them for the lowest price I've been able to find: $2. Well, to my surprise they rang up at $1 instead! I don't know if this is a glitch or a sale no one knows about, but it's a great deal. Try scanning these at your local store and you might be able to pick up this killer buy as well.
Posted by Scott Eggleston 2 comments:

From the files of Twitter and The Frugal Filmmaker Facebook Group comes another smattering of useful information for the movie maker with little to spend, but lots to say...

There is no tribe of normal
http://sethgodin.typepad.com/seths_blog/2010/04/there-is-no-tribe-of-normal.html

The Frugal Filmmaker, Episode 6:Make a PVC light stand for under $5
http://www.youtube.com/watch?v=IxN8_0kNJPc

Followers: An interview with Scott Kirsner
http://workbookproject.com/culturehacker/2010/04/15/followers/
Posted by Scott Eggleston No comments:

Make a PVC Light Stand for Under $5

Here's a post I've been wanting to put up for awhile. It involves creating a much needed item for those who need to hang their non-pro lights on something. These were made from necessity and have come in very handy. I am very glad to be able to share these with the world. Finally!

Thoughts on "Free" from the Conversation, NYC Edition:
http://trulyfreefilm.hopeforfilm.com/2010/04/thoughts-on-free-from-the-conversation-nyc-edition.html

What is The Golden Triangle and Why Should Filmmakers Care?
http://trulyfreefilm.hopeforfilm.com/2010/04/what-is-the-golden-triangle-and-why-should-filmmakers-care.html

Secrets of the Biggest Selling Launch Ever:
http://sethgodin.typepad.com/seths_blog/2010/04/secrets-of-the-biggest-selling-launch-ever.html

Frugal Lessons from the Set of '127 Hours' 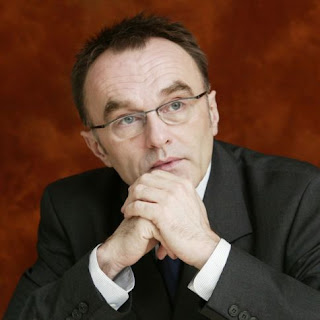 This past week I was able to work as an extra on the set of Danny Boyle's new film 127 Hours. It's being shot here in Utah and a lot of locals are working in it. I had the great opportunity to observe an acclaimed director and how he operates a feature film set. I also gleaned some valuable lessons to use in my own movies.

One of the first things that struck me was how much money flows through a professional production. I arrived at 6:00am and by the time noon had rolled around, all of one shot had been completed. You can probably guess how many shots are in a feature and with all the crew and talent and extras being paid, I can see why budgets are so large. The lesson here is get things done ASAP or you will also be paying through the nose. If not in money, then time. We don't have the luxury of keeping people around for one camera angle. Be prepared and efficient. Get as many setups as possible in the time allotted. I realize Boyle has free reign, but this seemed extreme.

Gotta love those practical effects! In the story, rock climber Aron Ralston (James Franco) gets his arm pinned under a boulder then cuts it off to escape. I was a reporter in a press conference scene featuring Ralston's first contact with the media after his release from the hospital. In it, his arm is missing from the forearm down. No green glove and CGI trickery was used here, only a sling with a hole that allowed Franco to hide his hand inside of his shirt. Simple and effective.

I also liked how the "shafts of light streaking in the window" effect was accomplished. A smoke machine was placed just outside the door of the small room. Then a fan sucked the smoke into the room, blowing the fine mist everywhere. This created the subtle effect. It's one anyone with a fogger and fan could reproduce.

Later we in the Energy Solutions Arena where the Utah Jazz play, recreating a flashback scene. Earlier in the year I was in an Olympic commercial at Rio Tinto stadium where extras were "tiled" to simulate a stadium full of people. This meant moving all over the stadium as as group, then multiplied in post. Again, Boyle used the old school approach. For every angle of the the leads, crowd filled the frame just around them, whether straight on, or at an angle (which was more involved due to the depth of the shot). You may not be able to round up 350 extras for your movie, but the idea could still help you pull off something similar.

Finally, Boyle was a very nice and funny person who treated everyone (including lowly extras) with respect. His set was fun to work on, especially when he was close enough to observe, which was very often. He even gave me specific direction to react annoyed when Franco's co-star (a British girl I couldn't find on IMDB) stood up in front of me, blocking my view of the game. I'll probably be easy to spot in the film as a result. Overall, a good day for me. It was long perhaps (14 hours), but there was no better classroom I could attend to teach me valuable lessons to better my own skills.

On The Frugal Filmmaker Facebook Group, I email a weekly list of links that I posted there and on Twitter. There is no reason I shouldn't be doing the same thing on this blog, so followers of it can reap the same benefits. In the future, I'll start publishing this list on Saturday night, just like I do on Facebook. Enjoy!

Failure, Success and Neither
http://sethgodin.typepad.com/seths_blog/2010/04/failure-success-and-neither.html

Transmedia Storytelling - Fishing Where the Fish Are
http://workbookproject.com/culturehacker/2010/03/31/transmedia-storytelling-fishing-where-the-fish-are/

The Frugal Filmmaker: A Visit to River Road Creative
http://filmflap.blogspot.com/2010/04/visit-to-red-river-creative.html

Bullets Out, Batteries In
http://feedproxy.google.com/~r/Diyphotographynet/~3/bt857a0d-UI/bullets-out-batteries-in
Posted by Scott Eggleston No comments:

In this week's episode, I look at some cool things you can do with a gray card and/or the palm of your hand. Not only that, but I learned about an undocumented feature on Canon HD camcorders. When you don't have enough light, the camera will warn you accordingly. Since some of these cameras allow you to turn off Auto Gain Control, this feature is invaluable to getting the best picture possible.
Posted by Scott Eggleston 5 comments:

A Visit to River Road Creative 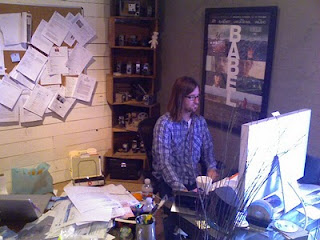 When I was in Louisiana last week, the friend we were staying with suggested I tour a small production company that he had done some construction work on. The company was River Road Creative, owned by Richie Adams. Richie earns his bread and butter creating movie titles and was also involved in the promotion of his own indie film, Inventing Adam. 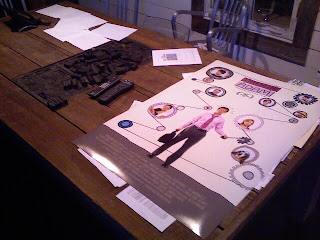 I was impressed by Richie's setup of modern technology (lots of Macs running Final Cut Pro) contrasted by the rustic design of his office. It was a nice change from the contemporary art-deco look that you would expect. I loved the placing of media antiques (typewriter, printer's type, life magazine covers) all over the office and the retro mood it created. Plus, Richie was
a cool guy and it was great meeting him. 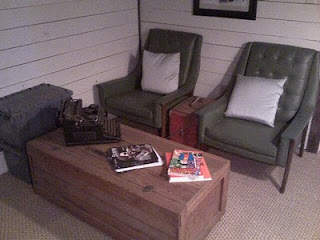 He told us about his feature which was shot on HD for a low budget of $200,000. It has taken him six years to finish and while I admire him for doing it, I have to say that six years would be too long for me to languish on anything I wrote and directed. More power to him, though. That's a lot of work. 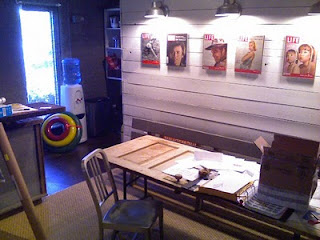 Here's sending good karma out to River Road Creative. Richie's living proof that you can live the dream and get paid for it. And have a cool office to do it all in!