A Short Film and a New Schedule

Sometimes I feel more like a reporter than a filmmaker. I really enjoy everything involved with The Frugal Filmmaker, but I miss making movies. Going back to grad school was a forceful move to remedy this, to not only get a MFA degree, but to force myself back into the trenches to learn the things I thought I already knew. This short is the first real product from my first semester.

It also marks the end of the first month of a new release schedule that I am attempting. The first Wednesday of the month will be an episode of The Frugal Filmmaker that everyone is used to. These are the more involved episodes that involved DIY builds and technique overviews. They will now only hit once a month (unlike my previous sometimes-reached goal of every three weeks), but that break should prevent the two-month gap that plagued me with The Frugal Floater and other episodes.

The third Wednesday will see a Frugal Filmmaker Tip of the Month. These episodes are more rapidly produced, take less editing and will cover a smaller topic. They should still have lots of good info, but won't be the production behemoth of the regular show.

Finally, if there is a fifth Wednesday (which seems to hit every other month), you'll get a new short film. This is the most exciting addition for me, as a filmmaker should always be making films (not just instructional videos). These will include films made at school, as well as others that I make independently. The above video is the first in what I hope is a long line.

If that isn't enough content for everyone, next year I'll be starting a new show that will be a weekly companion video to the Weekly Recap Link List. I get so many good comments and emails on top of the links featured on the Facebook Group, that there needs to be a place to feature them all. A weekly "quick & dirty" highlight and mailbag show should fit the bill and also include the YouTube audience which has been left out thus far.

With all that blah, blah, blah out of the way--enjoy the movie!
Posted by Scott Eggleston 1 comment: 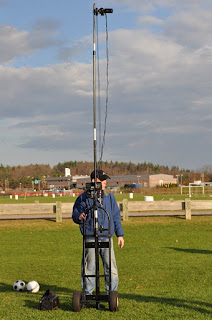 Not sure if you remember this question from back in July, but I finally made and have tested my version of the Hi-pod. I borrowed heavily from your jib crane and other videos to create a FrugalPod. 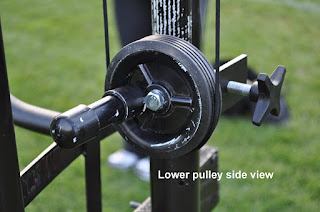 I used your pulley system from the jib and mounted it vertically on a extension pole used for painting. I then inserted that pole into a piece of PVC pipe connected to a dolly for stability and mobility. For the bottom "bearing" I rested the pole on a furniture slider that rotates on a felt furniture pad that is stuck to the bottom of the dolly. I used a 7" portable TV for my monitor and connected a LANC remote control for the camera control. 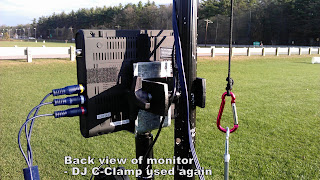 Although I'm not using this for filmmaking, I thought your audience might be interested. I've attached a few pictures. 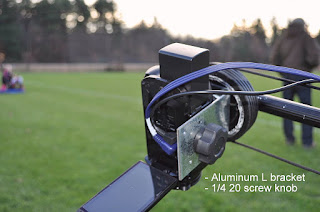 Thanks for creating and updating your site. The information is very helpful. 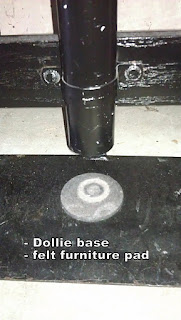 Scott sez: Whether or not the FrugalPod has filmmaking applications (the retail version is used for covering football games), I admire Alan's ingenuity for creating his own version. I know how much time and money goes into one of these builds and Alan deserves a lot of credit for making a DIY rig with few (if any) predecessors.

Here's some video footage from this rig: http://vimeo.com/channels/ljtproductions#32648898 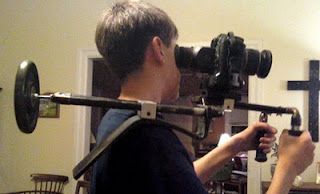 25 photography gifts for $25 or under
http://www.diyphotography.net/25-photography-gifts-for-25-or-onder

On Quick FX this week (okay, last week), Knoptop provides us with an interesting take on the PVC stabilizer rig, this time tweaking it to better work with his DSLR, the Canon t2i. I like the idea of one hand forward (follow focus) and one hand back (pushbutton controls), though I'm not sure if the offset hands would be very comfortable for very long (Aaag! My back!)

The great thing about Dave's idea is he's just putting it out there for all to see and use. One thing I really love about the blogosphere and YouTube is that it's essentially one giant free-flowing exchange of ideas. Like an idea? Use it! Don't? Don't!
Posted by Scott Eggleston No comments: 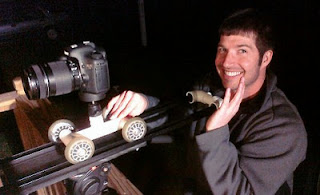 In an effort to post more content (something viewers keep asking me to do), I thought I'd try a monthly tip segment. These are ideas that aren't fully fleshed-out enough for a "real" episode, but could be useful.

Today I'm talking about color correction, something I'm not very good at. Learning a basic truth about the color wheel opened a huge door of understanding for me and I had to share it. Again, I'm far from an expert (even calling me a novice might be a stretch) on this topic and am just passing it on.

Feel free to tell me what you think of the "quick and dirty" format and the more simplistic content. This in no way replaces the official show, but will give those who have wanted more something to chew on between the meatier episodes.
Posted by Scott Eggleston 4 comments: 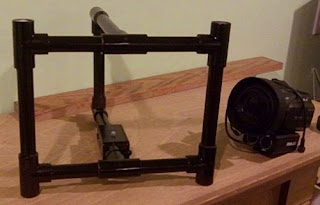 How your lens choice affects your subject's appearance
http://nofilmschool.com/2011/11/lens-choice-affects-subjects-appearance/

$25k film picked up by Universal for remake
http://www.filmmakermagazine.com/news/2011/11/ghost-from-the-machine-director-matt-osterman/

Knoptop has a new video out in his series briefly titled Things You Didn't Know You Didn't Know, a sort-of spin-off of his Quick FX series. It's basically a tips and tricks show, but Dave puts his kooky take on it and makes it unique. Which is really what I want to talk about.

What I like about Dave and his shows is how much he does with so little. I mean, the actual content of this episode is pretty sparse, right? He gives a cool discovery about a game built into the YouTube loading screen. It's something you could reveal in one sentence. So how does Dave make an entire watchable, entertaining episode out of this? This is where his genius lies and why I like his shows so much.

First off, Dave is very funny. The first thing he does is make a joke out of a very common filmmaking technique--cutting to a closeup. He then has a funny "reaction" to the finding of the game. Then he has the clever annotations, and so on and so forth. He always finds ways to pepper his shows with a variety of humor, which even in a simple show (like this one), makes it an enjoyable experience.

I also like the bevy of other information we get via links. Here, he plugs two web series he likes, one verbally and one in an on-screen link (look closely at the cell phone). And don't forget to read the description. There is always good stuff there not mentioned in the video.

YouTube has so much more to offer than "just" video content. Knoptop and his vids are a good example of what you can do with a little imagination, a lot of cleverness, and an bobblehead.
Posted by Scott Eggleston No comments: 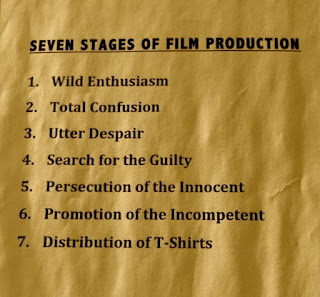 Another highly requested episode, my version of the Steadicam Merlin is done! If you really want a floating camera platform, this one might just fit the bill. There are a lot of these on the web and I hope mine works well enough to compete with the others, and payoff for those who build it.

Fortunately, it's not too difficult to put together, but I have to admit that balancing it can be a real trial of faith. This is an issue with all of these types of stabilizers, so please don't put a hit out on me if it's driving you crazy. It's just the nature of the beast.

If you can get past the bumps and are willing to put in the time, you'll have some unique footage that you can't get any other way. Just don't try using this thing in the wind (or even a slight breeze)--it won't work! 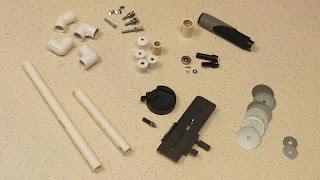 For the origin of the gimbal design and some amazing DIY floaters:
http://diycamera.com/stabiliser/index5.html
Posted by Scott Eggleston 14 comments: