The myth of preparation
http://feedproxy.google.com/~r/typepad/sethsmainblog/~3/yfbtzWW9y3w/the-myth-of-preparation.html

Recording of the week: maggots!
http://www.sonic-terrain.com/2010/09/recording-of-the-week-maggots-fun-by-richard-devine/

Film Riot: how to plan a movie shoot
http://www.youtube.com/watch?v=tuP3aBmSdU8#t=06m59s
Posted by Scott Eggleston No comments:

How Fast of a Class?

Solid state cameras are where it's at these days. Gone is the hassle with tape and its laborious real-time transfer speeds. With a memory card the encoding is done right in the camera and all you have to do is copy the resulting file. It's a great system that is the current standard right now, even in very inexpensive cameras.

Cheesycam is a great blog for DSLR DIY and alerts us to some great deals we can all use. Recently, they've been posting about the 32gb Transcend Class 10 SDHC memory card, a deal at B&H for $63.46. The "class" refers to the write speed, but I wonder what the actual advantage is. I've been using a 32gb Kingston Class 4 for a few years now (it gives me about 3 hours at the full bitrate on my Canon HFS100) and have never had a problem with the speed the video data gets to the card.

There is a 32gb Lexar model that is a dollar cheaper and uses the regular Class 4 speed. I'm not sure if Class 10 is really that much better or just a numbers game by the manufacturer ("10 is 2.5 times better than 4!"), so you might want to save a buck. Of course, getting a Class 10 may future-proof your cards for use in more modern cameras, but I guess only time will tell.

If you want to learn marketing...
http://feedproxy.google.com/~r/typepad/sethsmainblog/~3/_urJoKZyK5g/if-you-want-to-learn-to-do-marketing.html

How to build an online audience
http://www.nextventertainment.com/blog/2010/09/how-to-build-an-online-audience-competition-winner-spills-secrets/

Getting the RED HD camera for only $120!
http://tinyurl.com/332btn7
Posted by Scott Eggleston No comments:

One of the goals of producing The Frugal Filmmaker episodes has always been to gain a partnership with YouTube. This allows the folks at Google to place ads on your videos and share a cut of that revenue with you. This requires an application and you must meet unknown requirements of subscribers and views to be selected. I've hoped that maybe I could make the show self-sufficient so that it could run for a very long time.

I've had another thought about this goal, something that could be even more beneficial than a paltry sum: free distribution of feature-length content. One of the other benefits of becoming a partner is your upload limit jumps from 15 minutes and 2 gigabytes, to unlimited time and 20 gigabytes. This is a really big deal.

I try to encode my shows so they looks as good as possible and they still come in at under 500 megs (the longest episode was 11:28 and 418 megs). This means I could make a 2 hour feature and it would come in under 5 gigs, way under the 20 gig limit. I could then upload the entire thing to YouTube instead of a bunch of chunks (which a lot of people do now). This would let me stream full features to whoever wanted it in the world--much like Netflix or Hulu.

This makes Video On Demand a reality to any filmmaker who can make partner--all at ZERO cost. It means potentially world-wide distribution of your work, without hassling with any middleman. It's a very exciting prospect.

Of course, you still have to market the thing. No one will watch your film if they don't know about it. Monetizing it is another challenge, but releasing it for the world to see will get you many more eyeballs than the traditional method (which doesn't really apply to microbudget projects, anyway). And with current trend of YouTube being accessible through your TV and mobile devices, the sky is no longer the limit.

You just have to make partner.
Posted by Scott Eggleston 1 comment: 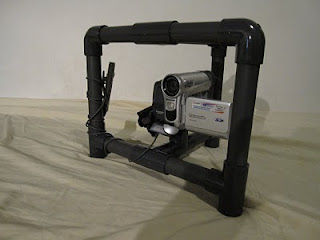 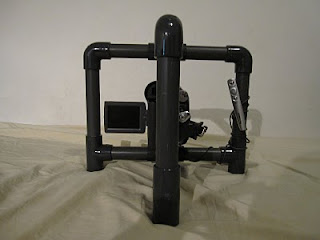 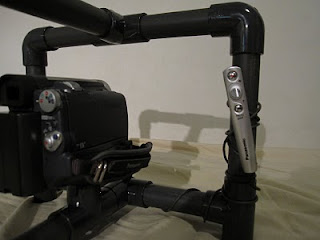 This is my edition of the frugal filmmaker camera stabilizer. As you can see i used Matthew Sorrels' tip and used an T-joint at the back instead of an elbow. I had to use gray PVC because they don't sell white PVC here in Iceland. I also used my cameras remote and wrapped the wires to the handles so i can control the zoom and record buttons directly from there.
Posted by Scott Eggleston No comments:

Improve your picture with reflectors
http://factoidz.com/improve-your-picture-with-reflectors/

Is the 35mm adapter dead?
http://tinyurl.com/25omrpd