I've never done much macro (extreme close-up) shooting, but I still think it's pretty cool.  When Fotodiox offered to send me an adapter that would make any of my lenses into macro lenses, I jumped at the chance.  At only $10 (for the Sony NEX version), it's a steal. It's definitely not perfect, but the low price more than compensates for the hoops you may have to jump through to get it to work properly. 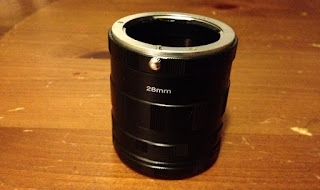 Recap Q&A: Have You Ever Shot on Film?

What is "Broadcast Safe"?
http://en.wikipedia.org/wiki/Broadcast-safe

Making a movie without a Hollywood budget and big crew
http://www.youtube.com/watch?v=TtMa1TW3Zig

How I color correct with DaVinci Resolve (FREE)
http://youtu.be/grN6SbGJkus
Posted by Scott Eggleston No comments:

In a scene from my upcoming thesis film, a certain device is described in a very specific way--hockey puck shaped.  Even though I wrote the script and had a pretty good idea about what I wanted, I went looking anyway. Who knows what better ideas I could stumble across with a little legwork? 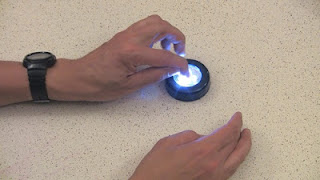 P.S. If you need to turn your PDF screenplay into a JPG so you can insert a page into a video (as I did here), pdf2jpg will do it for you online.
Posted by Scott Eggleston 1 comment:

Didn't like the "Collection Day" teaser? Make your own!

This 12-year-old girl can kick your butt (at making movies)
http://nofilmschool.com/2013/05/12-year-old-girl-directing-trinity-anderson/

How to get started with Magic Lantern RAW video on your Canon
http://nofilmschool.com/2013/05/how-to-get-started-magic-lantern-raw-video-canon-camera/

How to build a "bag of tricks" you can pull from in a pinch
http://feedproxy.google.com/~r/theblackandblue/~3/sSmBIqOtWHA/

16 recommendations for filmmakers for a sustainable creative life
http://feedproxy.google.com/~r/TrulyFreeFilm/~3/TzEsr8NVArw/1-best-practices-for-a-sustainable-creative-life.html

Things are chugging along for my grad thesis film, Collection Day, and that includes some marketing moves. Last week we launched (thanks to associate producer Stephanie Stephens) an official Facebook Page and a Twitter feed. There isn't much content as of yet, but we did recently post the first of three audition notices.

I also registered an official, easy to remember domain name (collectiondaymovie.com) that, as of now, redirects to the Facebook page. I'm sure there will be a better use for it in the future, but a domain name is cheap and good to have for easily directing anyone interested to more information.

I also created a short teaser video. Even though no one has been cast and not one frame has been shot (we've only had one meeting!), a teaser video can be a good way to create interest and dole out information. Here, I reveal some key points to the story in every piece of text. I slightly animate the text to create drama (except for the title itself) and for the tagline at the end, it moves in the opposite direction (more drama!)

Of course, what really makes the teaser (if it is made at all) is the music. I used a royalty free selection ("Darkness is Coming") from Kevin McLeod over at his great site Incompetech.com. I think the piece fits really well and reminds of the score from John Carpenter's The Thing (1982), which is something I want in the final score of my film.

So what do you think? Does the teaser effectively pique your interest?

Recap Q&A: What Remote Monitor are you Using?

YouTube user who asked about "The 180 Degree Rule": The P-Cult!
http://www.youtube.com/channel/UC9boXLr_-RBl1L_ILgpBVMA

Professional, organic, practical fx for 'The Fountain' & 'The Tree of Life'
http://nofilmschool.com/2013/05/microscopic-cosmic-organic-vfx-fountain-tree-life/

17 things about the film biz that should influence your behavior
http://nofilmschool.com/2013/05/17-things-about-film-biz-ted-hope/

Matrix effect with a ceiling fan and a GoPro
http://www.youtube.com/watch?feature=player_embedded&v=OEd5lTmeAH8

Speed up renders in Sony Vegas and most editing programs
http://youtu.be/QKhfSK3GQUE

The history and science of color temperature
http://www.youtube.com/watch?v=3HnhIRPLWsM
Posted by Scott Eggleston No comments:

This past Wednesday, the core crew for my grad thesis film, Collection Day, got together to go over a basic production timeline and discuss how we're going to get this project made. Producer Scott McEntire had already broken down the script and had a list of characters, locations and props.  He is very thorough and had lots of questions for me, which is great. Movies don't get made in a vacuum and there needs to be interactions between the producer and all the department heads to make sure things get rolling.

We also talked about the uber-important (and often neglected) marketing aspect and how we plan to raise the money for this mini-monster. Our associate producer, Stephanie Stephens, is not only an accomplished makeup fx artist (which will come in handy), but also a graphic artist (she's the one that came up with our first teaser graphic). She is wise to the marketing ways of Facebook and Twitter and was placed in charge of the upcoming Kickstarter campaign.  Smaller productions often have people wearing many hats and Collection Day is no exception.

We established some very important dates and deadlines, especially auditions. I'm a big fan of actors and really want to find some great ones to fill these roles. Our lead is a complex character and will need to have a certain range, both physically and emotionally, to be convincing. I know we can find her, but don't yet have any idea of who she might be.  Auditions and callbacks will remedy this.

Another important landmark we set was the month of shooting.  While it is still too early to set specific dates, it looks like the coming October will be when the camera starts rolling.  It seems like a a long time from now, but so much has to happen in the meantime, that it will be upon us very soon.

This meeting was very productive. Everyone had good input, important dates were agreed on, and we all parted with confidence that not only will the movie get made, but that it will be a good movie, worth watching.  Okay, that's how I felt when the meeting was over.

*Special thanks to Eric White for taking the meeting photos.

Today I roundup a few items from eBay, Dollar General, and (of course) Dollar Tree.  I've been looking for some near-future props for my thesis film Collection Day, and have been very interested in cheap digital watches from China.  They have some interesting designs and some could easily pass for wrist-worn communicators, which is exactly what I want.

Also in the show, I spend not much on a bunch of plastic army men, cowboys and indians, and buccaneers.  While it may seem like I'm just a giant child (which is very possible), I actually think we could use these for actor blocking and quick and dirty storyboards.

The last item is just a cheap pen/stylus you can use on your smartphone.  I find that trying to use my finger when trying to draw anything, just doesn't work.  Using your whole hand with a drawing instrument works much better.  Even though the pen on this combo device is terrible, the stylus will come in handy if you do any sort of diagramming (such as overheads) on your phone.


Posted by Scott Eggleston No comments:

Recap Q&A: Where was the Episode Last Week?

Soderbergh: Studios only gamble on openings, not filmmakers
http://nofilmschool.com/2013/04/steven-soderbergh-state-cinema-2013/#more-51196

How to carry a DSLR slider in your pocket
http://www.learningdslrvideo.com/carry-a-dslr-slider-pocket/

Next Wednesday night is our first pre-production meeting for my grad thesis film: Collection Day. Our associate producer, Stephanie Stephens, is also a graphic and effects makeup artist. On her own, she came up with the above teaser graphic which incorporates several elements from our sci-fi action drama.

She also had a wonderful marketing idea of creating temporary tattoos that we could pass out and use as a form of advertisement. By that time we should have a registered web address that will either lead to our web site or Facebook page. She even speculated about creating a tattoo with a QR code that could be scanned by a smartphone for similar results. All good ideas.

Anyway, the meeting on Wednesday will feature all main department heads, with the goal of creating a timeline leading up to our shoot in September. Producer Scott McEntire sent an email to everyone with the prediction "everyone will walk out of this meeting with something to do".