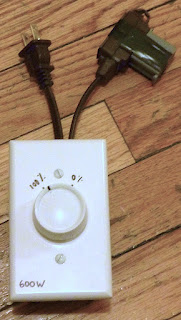 Today I am writing you because I was short on dimmers and you inspired me to build one. I started watching your videos chronologically, and that was the first one. So I went out and got the parts for the dimmer as well as some random PVC pipes and parts that I thought I should practice with.
Attached are a few pictures of the dimmer I built. I added a few very simple improvements, that I think are worth adding perhaps to the comments of that video page.
1. I added markers on the dial knob and the surface of the dimmer to mark the 100% and the 0% points. When working on set I find that we often say things like, "give me 20% less" or "take it down to 75%". So adding specific marker points will make it easier to be a bit more scientific about where to dial in the light levels. Cost: nothing, or the price of a sharpie.
2. I used a white surface to make it easier to see the markings on the dimmer itself.
3. I added a "600W" label on the dimmer so that anyone that picks it up knows what it is rated for at a quick glance.
4. I used electrical tape to surround the plastic bottom piece so that the tape would close better the gap that was left in the round hole where the wires came out of the box. Color coded electrical tape can also be used to personalize one's gear. I just used black cause i was too lazy to use my regular colors (red and yellow), and I was also thinking of making it a gift to a DP I work with.
5. I attached a Ground Lift to the female end, and taped it down with electrical tape, so it will always live as part of the rig. I taped it all the way around a few times, then just poked through the tape where the prongs insert. This way there is no need to frantically look for a small ground lift at the last minute when its time to use the dimmer (I do this with all my dimmers).
So there you go. A few very simple additions that make life easier on set.
Keep up the good work. If I continue building some of the rigs you showcase, and if I find ways to improve them a bit, I will share those tips with you so you can share it further.
Scott sez: These are some great improvements for the basic dimmer (that I didn't create as much as replicate). The permanent addition of the 3-prong to 2-prong adapter is my favorite. It should also be noted that if you blow a light when using one of these dimmers, the dimmer blows too and will need to be replaced. It happened to me! 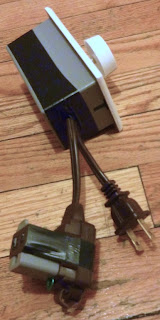 Scott, you may already know this but you can't use a dimmer on most lights/bulbs. They'll explode. If the light/bulb says it's compatible with a dimmer then sure it's fine.
http://answers.yahoo.com/question/index?qid=20091004003255AArL4Ef or http://www.green-energy-efficient-homes.com/dimmable-cfls.html

I use a speed controller (15 amp, 120VAC) for my dimming my ARRI lights. Cost is about 20 dollars from Harbor Freight.