This past weekend I ran audio for the short film, Another Day. It was directed by Antonio Lexerot who has previously worked for me as an actor. His audio guy baled and I filled in. It was a fun day and everything went well. 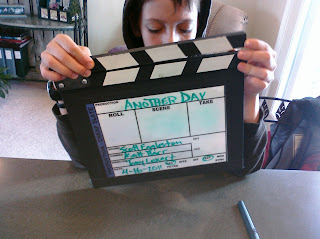 A neat trick I learned involved Antonio's slate. I had previously created a Cheap Slate for him on laminated card stock, which he gaffe taped to a wooden clapper board. On the back was eraser storage, created by utilizing a large part of the blister pack the eraser came in. The plastic was gaffe taped to the back of the slate and the eraser slid in and out when needed. Handy. 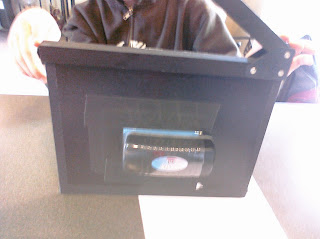 This is not only a great idea, but since you are using part of the original packaging, not much is wasted. Nice repurposing! The only thing I would add are some clips on the back to hold the dry erase pens. Place them on both sides of the eraser and you won't affect the thickness of the slate any more than you already have.
Posted by Scott Eggleston