I've been in Louisiana this week to visit friends and shoot a short documentary. There were several interviews to record and I was excited to try out some budget lighting gear. This involved basic three point lighting using 2 incandescent bulbs (for key and fill lights) and a halogen spotlight (for the back light). The bulbs were mounted in clamp light fixtures attached to PVC light stands. All of the stills extracted below are from the original footage and have not been retouched, cropped or color corrected. 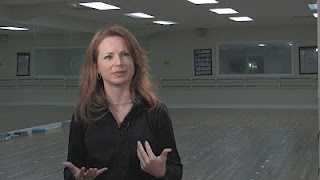 This interview with Carrie was done in the dance studio she works in. Since I had no way to match my lights with the room's florescent lighting, I went ahead and white balanced anyway (on Carrie's light) and it looked better than I originally thought. Notice the key light on the left and the weaker fill on the right. Both lights are 60 watt bulbs, with the fill being farther away than the key. The halogen spot (controlled by a dimmer) nicely illuminated Carrie's hair and shoulder on camera right. 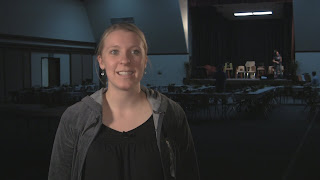 Here was another location that was impossible for me to match color temperatures, but it worked well anyway. The room lights were again florescent, which turned the room blue when I white balanced on the subject using the 60w bulbs. It made everything look frigid, but when I only turned on the lights just in front of the stage, there was a nice buffer of dark between the subject and the stage (which DID have matching lighting). I like this distant blue opposed to the entire room looking like a meat locker. Very moody. 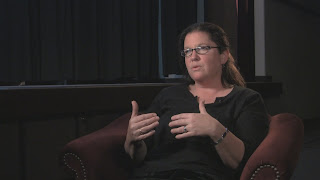 This shot was in front of the same stage seen in the previous example. We put show creator Janel in a cushy chair and lit her with the exact same setup as the others. I really like how the back light that nicely brings out her ponytail also helps show the arms of the chair. All stage lights were turned on (giving some blue lines to the lighter parts of the stage) so she wouldn't be in a black hole. Her glasses did reflect the two bulbs from time to time, but she didn't want to take them off, so we had to live with it.

Again, these examples are using two 60w soft white bulbs for key and fill lights (4 for under $1) and a halogen spotlight ($7) being controlled by a dimmer (made for around $7). All bulbs are in clamp light fixtures with scoops ($5-$7) attached to PVC light stands (under $5 each). I freely admit that I am no expert, but you can get some cool results without having to resort to a pricey light kit. I just showed you three of them.
Posted by Scott Eggleston

Those shots look really good! Could you post a picture of your set up or do a tutorial for it?

Great site, keep it up.

Agreed. Im guessing this is the setup from the box. Id really like to see a sample of how you did this at least. These shots are extremely clean.

How much of this was totally by accident?

Chris, you are right, the gear I used was in the box that I mailed myself in the previous post (and some that I built afterward). I can see I need to be more detailed in how I set these up. This would be good fodder for a show episode.

I'm not sure what you mean by "totally by accident". I studied the locations (I had never seen them before) then decided what might look good and set up the lighting. I may have been a bit lucky, but I feel like I have a good eye and know basic three-point lighting enough to create something worthwhile.

I was just asking if it was by accident because you seemed pretty surprised it all worked.

Ive been trying to see how three point works since being an actor turned filmmaker I never looked into lighting. I would love to see the pvc stands you made. Ive been looking at different models to try out and Im worried the weight might be alittle much.

I guess I wasn't surprised it worked, just that it worked so well! The PVC light stands will be revealed very soon. They'll get featured in their own episode The Frugal Filmmaker, probably in the month of April. My versions are fairly sturdy and can hold light clamp lights to the heavier 500w work lights found in any hardware store. I think they tested well in the field and am looking forward to sharing how they are made with everyone.

That Id be excited about.... All in all good post showing that its possible in two boxes to shoot some very well lit nice looking video.

I know itd be a stretch to explain but I dont think theres enough info on three point lighting online. Having more info on it might drive people to your blog. Its such a simple concept that I know it seems trivial but anyone whose looking to understand basic lighting is going to be looking for that info and another one of us is born every second....

Very nice explaination and video accompaniment. I've been doing theater lighting for years, and more recently lighting in my colleges' TV studio, and despite knowing what three point lighting is in practice, could never and have never seen it explained as clearly as you did.

I don't really see the fill light in Carrie's photo (which might be a good thing -- ninja DP ;)) and the other photos look really good.

I'm going to need to experiment with my clamp lights some more because I've been using bulbs with 3-5x the wattage than the ones you used.

Thanks for the post; I love looking at lighting setups and seeing how they were done.