While it may seem super basic to describe the camera pan and tilt, it's still an important shot that every filmmaker should know how to pull off. If you have never heard of this camera move, the pan (from the term panorama) is to move the camera left and right, while the tilt is to move the camera up and down. Very simple stuff, but that doesn't mean you should be lazy when using it.

What I find interesting about the pan and tilt, is that it's one of the few shots that mimics the movement of the human head. When we need to look around we pan or tilt our head, just like a camera on a tripod. A tripod which also has a head, arm, and legs. Interesting.

In the video I show some examples of pans and tilts (sometimes solo, sometimes in tandem with other shots) from my short films. On the surface it seems like the simplest of moves, but like all camera moves, it can be as simple or complex as you want. The pan and tilt are revealing shots that hold back critical visual information until the move is complete. It's one of many storytelling tools you have at your disposal.

A fluid head on your tripod is a must when performing a pan or a tilt. The oil bearing in a fluid head will give you buttery smooth pans and tilts right out of the box. You'll still need to practice, of course, but you'll never regret getting a fluid head on your sticks. Conversely, trying to do a pan or tilt on a still camera tripod (with no fluid head) is a nightmare. Spare yourself the misery and don't do it. 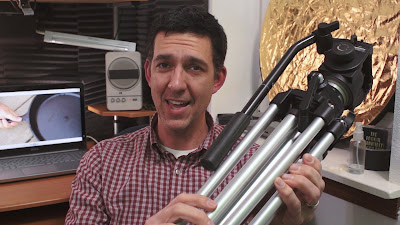