Write your Script with the Short Film Idea Deck

CLICK HERE TO ORDER YOUR VERY OWN IDEA DECK!

Writer’s block stinks. I really hate it when I have the seed of a good idea, but can’t seem to flesh it out into anything worth shooting. If only I had a little push to get those creative juices flowing, I might have a chance in getting something written.

When this happened to me recently, I turned to the web for answers. I knew there were creative aids out there in card or dice form that would help with the creative spark. These devices used pictures and/or words that, when chosen at random and linked in a certain way, would form a story or plot with your brain filling in the details.

In my search I found Storyteller Cards and Rory’s Story Cubes. The former was based on a standard deck of face cards and had a cartoon style of artwork that showed various characters and objects, actions and letters to help with your story. The Cubes were pictures only that you would roll and let you form a small narrative based on what came out. There’s even a smartphone app of these Cubes.

I liked these, but wanted something a bit different. I liked the deck of cards idea, but I didn’t like pictures only, as I felt that words can be just as inspirational (or more so) as any image. I also wanted to add my own terms and pictures. It was clear that I wanted to design my own custom deck of cards, so I went looking on the web for a site that would let me do just that. I’m not a graphic artist, so I would like to use provided online tools to create whatever cards (with whatever information) I wanted. 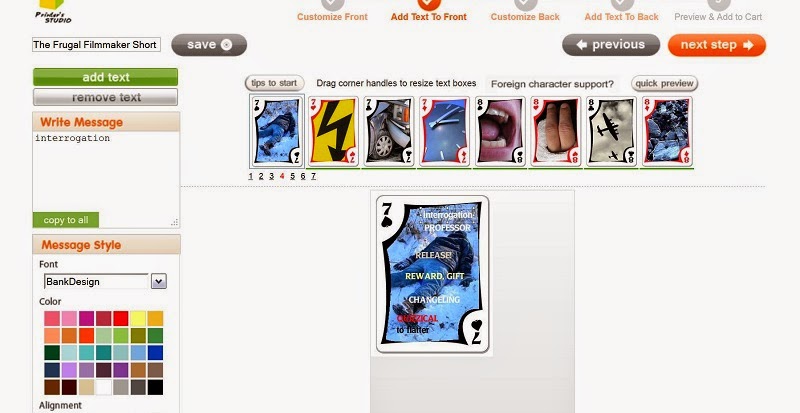 This led me to Printer’s Studio, a site that will let you create a ton of your own custom merch, including card decks. You can create sizes from mini to tarot, putting your design on front and back, all the while doing as little or as much as you want. I opted for the standard size card deck and used one of several templates which provides the face card info (suits, numbers, A, K, Q, J, etc.) while you fill in the rest.

I used the online toolset to label each card with the following:

I also put this list on the two jokers, just in case it’s not obvious what each of the terms mean. Since the text is over a different picture on each card, I had to change the color to be more readable. One thing the PS tools did not let me do was add a drop shadow or outline to text, which I really wanted to help the terms stand out. This is probably the largest drawback of the PS toolset.

You can preview what every single card looks like, by going to my PS store and clicking on the card image. If you wanted, you could just write down all the card info on a cheap deck with a permanent marker (which I did at first), but the finished deck is much nicer.

Once I was done, Printer’s Studio did the rest. I paid less than $9 plus shipping to have my custom deck printed and shipped to my house. If you do a web search (or on the PS site itself), you can find a $5 off any order coupon which should take care of that pesky shipping charge.

I was pretty impressed with the quality of the final product. Design issues aside, the card stock was nice and the images and text looked pretty sharp. It looks and feels like a real card deck. I’ve never done this before, so I have nothing to compare it to, but I can’t say I’m disappointed. 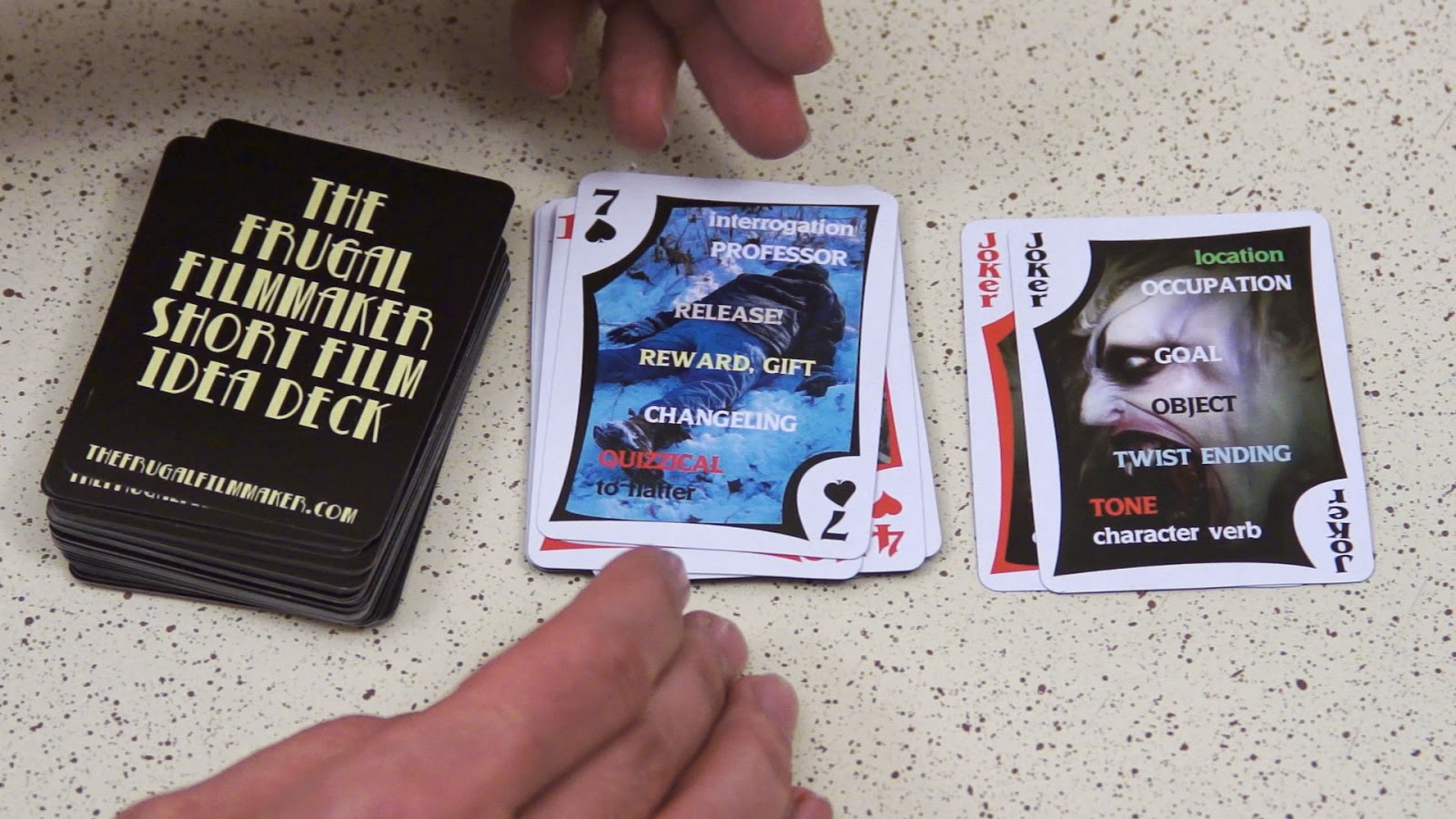 Using the deck is simple. Shuffle, pick what it is you’re looking for and draw! Use whatever information comes up to fill in the blank. I tried to be vague with my terms, requiring you to flesh them out. I just run down the list given on the joker, only I do the character occupation as many times as I need to fill out my cast, which is normally two or three. If you don’t know how many people are in your story, draw and use the number on the card, with maybe a three character limit.

The “conflict images” (courtesy morgueFile) can help devise an added threat to your story, or the main conflict itself. One card features a hand in a cast. Was it an accident? Did someone do this on purpose? Was the cast used as a weapon? Is this a real or fake injury? You could even use the images alone to form your story.

Then there is the face card information. The suits could represent seasons, compass points, or anything in sets of four. The numbers could be used to select a random number of characters (as shown above), units of time, days until the ransom is due, etc. You can use the red/black color as yes/no, on/off, or male/female.

There are no set rules here. The Short Film Idea Deck is there to help you get your story up and running. It’s totally open-ended and you can use as much or as little as you want. You can take the info and use it in your own deck or system, or get this exact deck for yourself. I thought it was a kind of a fun idea that you might enjoy as well.

If you do purchase one of these, I’d love to hear your feedback. Let me know what you think will make the deck better and more useful. This also has gaming potential (aside from the fact you can play any face card game) and I’m interested in that angle as well.

Please comment below so others can hear your opinion and chime in with their own ideas and thoughts about The Frugal Filmmaker Short Film Idea Deck. Take that nasty writer’s block!
Email Post

fotoguy said…
Well done! They look great and you shared a lot of great ideas. I hope that when someone uses these cards, they will share their film on YouTube. I do video interviews only (and thanks for the mention in your last video) but I do play cards and these would be cool just for that.
February 12, 2015 at 12:03:00 PM PST