If anyone has been wondering why I fell off the radar over a month ago, you can probably guess. Yep, I started shooting my thesis film and it quickly absorbed my life. I knew that I would not be able to shoot my movie and keep up with my YouTube/blogging duties, so I had someone shooting behind-the-scenes footage that would debut weekly on my channel in place of the content that I would normally create.

Well, it didn't quite work out that way, but some episodes are now complete and will be hitting the channel and blog in a timely manner, interspersed with original content from me. In this first episode, we take a gander at the first day of shooting, which covers an early scene in a moving car. 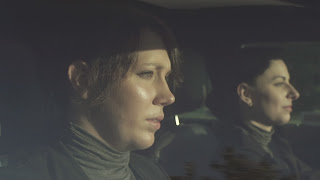 If you are asking why I decided to suction cup the expensive Sony FS700 to the hood of the car instead of shooting a greenscreen setup, it's because I hate greenscreen setups. The goal was to use as much practical shooting as possible, and I want everything to look as realistic as possible. I really don't like the artificiality that comes from a chromakey, though I fully admit shooting in a real moving car has its own set of problems.

Then again, what shoot doesn't?
Posted by Scott Eggleston

What type of arrangements did you make for the car?

As stated in the video, it was a rental car. Unfortunately, I had to rent it for a week because it was not only needed for this shoot day, but also a week later when we see the outside of the vehicle. I wish I could have had these two shoots closer together and saved some money, but actor availability determined the shooting schedule.