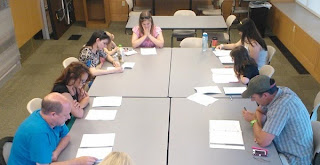 Last Thursday the cast and producer Scott McEntire and I got together and read the Collection Day script through from beginning to end. Known as a "table read" (for obvious reasons), this is really the first exposure the entire cast has to each other and the first chance that I (as the writer) got to hear my all my dialogue read by real actors.

I really enjoyed the results. I like this group of actors and even though this is very, very early in the performance process (no rehearsals yet), I enjoyed hearing them breathe life into these people. This script has been workshopped for about a year, so I feel pretty good about it, but until now, these fictitious characters have just been written words on a page. Getting them all together is more proof that this is going to be a completed film come April.

I also had a great chat with lead Kayla Esmond, after the read was over. Her character of Taylor is a complex person and I wanted to discuss with her who we think that person is and what her goals and motivations are. Kayla uses some pretty intense methodology to get into her characters head, and I really admire her work ethic.

I'm really looking forward to working with Kayla and the rest of this group come October when cameras roll. There is still a lot of work to be done until then, but I am only encouraged by events such as this one. I'm a big believer in doing as many extra things as possible to help your film shine and this is one of the simplest.

Up next, the Kickstarter campaign to raise our budget!  Watch for it August 1st!
Posted by Scott Eggleston