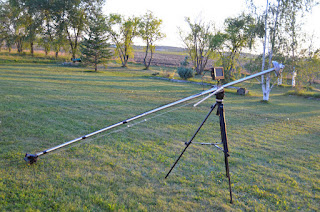 I can' t remember how I found your YouTube channel but I wished I had found it sooner, I would have saved myself a bundle of cash!

Initially I started to collect the parts for the first version of the Frugal Crane and while searching I was not really satisfied with the selection of wheels or fishing line that I looked at. Luckily for me, I found your updated version 2.0. I had just updated my garage door and had the parts sitting in the garage.

As for additional parts, the only changes from your initial parts list was the use of a bracket that held the garage door rail to the wall of the garage, 3/8" nylon lock nut for use on the top pulley, 1/2" end caps instead of plugs, a rubber 1/2" washer for a garden hose, used between the top pulley, and a flat washer which when tightened creates enough tension to alleviate the touchiness. 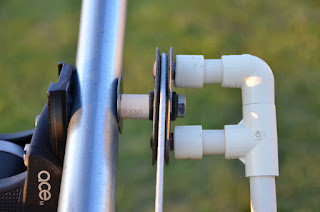 The construction doesn't differ much with the exceptions of using 1" PVC spacers between the boom pole and pulleys (slightly flattening the top of the pole), exchanging the plugs for end caps (not available in store when I bought the rest of the piping products ) and lengthening the PVC lever allowing for smoother tilts.

Having a HD 7" field monitor I have the ability to use an HDMI cable ($14) and an HDMI to mini plug ($5). The cable was then permanently taped onto the top section of pipe to stop it from rolling and then tie strapped on the bottom section allowing for movement for folding of boom pipe upon takedown.

The dumbell handle I bought at the Canadian Walmart was chromed, so instead of cutting it, I ground down the stop collar on one side just enough to get it to be banged into the end of the pipe. I then used a hammer and large flat screwdriver to crimp the end of the pipe to stop it from backing out. 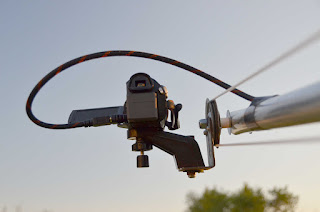 The camera is mounted to the plate with a bracket that came with a spring loaded shoulder stabilizer I purchased, unfortunately I paid too much again. Fortunately, it was the wrong bracket that they shipped so when the proper one came with a quick release this one was obsolete, until now!

Although the final product cost around $70 Canadian, it nowhere near compares to the price of the Cobra Crane I was salivating over.

Scott sez: Nice job, Christopher! This is exactly what The Frugal Filmmaker is all about. Taking an idea, tweaking it, and sharing the results. The Frugal Crane is probably the toughest of all my builds, but I'm glad Chris was able to make it work. Now let's see some footage!
Posted by Scott Eggleston

Here is the first footage I shot,a little rough but gives you the idea of it's possibilities.

Hello there! Thats a great post! I would like to ask you where I can find a pulley like this one with a ball bearing in the middle. It seems Im having trouble finding one so any help would be great! I leave in Greece so I look for online shops. Thank you again!