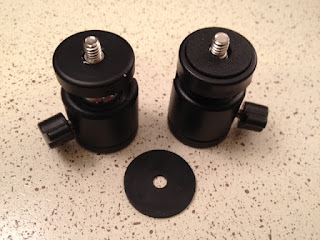 If you've followed any of my DIY camera mounts, you may have noticed an element that I use again and again: the mini ball head. These are great for adding inexpensive articulation to any camera mount, something indispensable for getting your shot just right. Found on eBay, they are easily obtained (as long as you don't mind waiting for the two weeks shipping from China) and are quickly added to your contraptions through the 1/4" or 3/8" mount found at the bottom. They are fairly well-made for the price ($5) and have mostly metal parts. Not too bad a deal.

One thing I have noticed, is that there are two versions of these cheap ball heads on eBay, and you really can't tell which one you are going to get, since the pictures appear to be interchangeable. So what's the big difference? One of the mini ball heads has a metal platform surrounding the 1/4" camera mount, and the other is plastic. In the photo above, the metal version is on the left, with its plastic counterpart on the right.

What does this mean? The metal version has no spongy pad on the platform, which really helps secure your camera or quick release in place. The plastic version comes with the spongy pad built into the platform (see above photo). This is easily remedied for Metal Man, but getting a rubber 1/4" fender washer (also seen above) and placing it over the thread and onto the platform. It performs just as well or better than the built-in version and will only add 50 cents onto the total cost of your build.

That's the only advantage the plastic has over the metal. The major difference (and the most important one) between these ball heads is that when the metal version hits the floor, it will survive. The small nick you see on metal platform was the result of such a fall. It received a small scar and still performs it's function. I had a plastic version take a similar fall and the platform cracked--and had to be discarded. The ball head can still be used (that one now lives on the Frugal Clamp supporting a Sima Quickonnect), but only if the platform isn't critical to your build.

All this means is that while you may want the metal version (which I do), it's a crap shoot as to which one the Chinese distributor will send you, even if you study the photos and choose accordingly. I firgured that the plastic version was the one with the built-in pad and chose the other, non-pad version. However, when the three I bought showed up in the mail, they all had plastic platforms with spongy pads.