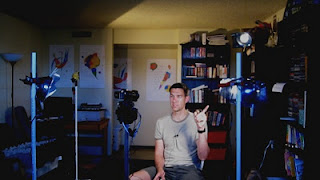 I am really grateful and glad that so many people seem to be enjoying some of the filmmaking contraptions that I have been putting together for the last year or so. I've had lots of great comments and support and am still amazed when people make requests for items that have been made many times over. I'm flattered that you constantly want to see "my take" on any given piece of homemade gear.

I has made me think, however, about how easy it is to get caught up in obtaining that gee-whiz item that will finally let us make our film, even if that item is a cheap, DIY knock-off of the retail version. It's a trap, really, that keeps us from flexing our creative muscles when we feel we "need" some piece of kit that will make our shoot possible.

From a completely minimalist perspective, the only gear required to make a film is a camera. You don't need a dolly or stabilizer or jib. None of these will make your film "better". It's all about technique and what you do with what you have (a good story doesn't hurt, either).

Granted, some of this stuff costs nothing to make (The $5 PVC Stabilizer is still the most popular video I've made), but if you don't have it, so what? Soon you'll be telling yourself you need the next item on the list and soon you're in a downward spiral of need, need, need instead of write, shoot, edit.

Of course, there is an opposite side to this coin. While I admit all you need is a camera, I cringe when I hear things like, "I don't need lights!" and "the on-camera mic is just fine!". You DO need lights and you SHOULD use an external mic. People watching your film deserve to see and hear what is on screen, even in microbudget-land.

Does this make me sound crazy? After all, most of my show episodes are built around the very thing I seem to be criticizing. Gear is great, but the desire to create and express shouldn't be tied to it.

All I'm saying is that the most important thing about being a filmmaker is you need to make films. Waiting to obtain the latest bell or whistle is just plain silly. Did Dumbo need the magic feather that he thought made him fly? Nope.
Posted by Scott Eggleston

I agree whole heartily Scott. I have tried a few things; but decided unless there's a need, better hold off on the urge to make something, even though I love making things!

I have had a base Lowell light kit for about 10 years; but honestly, I have really seen some very affordable alternatives to lighting through the DIY movement, and kits that are very customizable. I think that's great!

Ultimately, someone who desires to tell stories will do it effectively with whatever they have... hopefully, they will offer much inspiration!

This is very well spoken! I think it hits the point in many areas of life - be it software development (tools, tools, tools) or travelling (need better car/backpack/other gizmo).

The point is: DO IT!

So hopefully I will become better in this field as well ;-)

Thanks for your inspiring posts!

This article is wonderful.

Awesome article! It serves as a nice, humbling reminder that the next 'thingy' won't make our work any better. Besides, you can always fix your production blunders in post, right? :-P

I think you make an excellent point and you do so powerfully. Coming from a gear geek like yourself, this message speaks many decibels louder than it would from another source. I agree with you, but even having said that, I dropped $75.00 on PVC and sundries the other night and now I sit here itching to go create some gear in my studio. Does that make ME sound crazy? (maybe it just makes me sound like you a bit [grin]).

There is a difference between a professional and an amateur. When a moment of opportunity arises, the amateur ponders how he should act, and misses the moment. The professional just acts without pondering, and the moment is his.

I sense a correlation.

Hope your weekend is great!

ENDNOTE: Another frugal tip for you. Lowes gives you a price break on PVC pieces if you purchase a quantity of 10 or more. At least my local Lowes does. It's just a few cents, but pennies count. I have a spirit of frugality. I also have the wisdom to realize that once I start down the path of PVC creation, I would most likely continue on that path. These two things freed me up to go a little nuts purchasing pvc parts. I haven't had the chance to build anything with the PVC yet, but I do go to sleep thinking about it.

So yes, I admit it, I have gear lust, but at least it's for inexpensive, reconfigurable, pvc gear. [BIG GRIN]. But you'll be happy to know that the day after I bought the PVC, I did not build the gear, instead I was outside filming the incredible fall foliage.