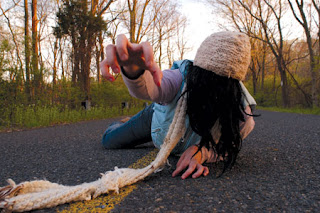 Lance Weiler is one of the guys who brought us The Last Broadcast (1998), a faux documentary about a killer in the Pine Barrens of New Jersey. Last year he self-distributed his latest feature Head Trauma, to seventeen theaters across the country, followed by a prompt DVD release. A master of web promotion, Weiler has as wealth of knowledge and wants to share it--which makes him even more amazing.

I've been following Lance across the web for awhile, reading everything I could find on the guy and his movie. I was never able to see it in theaters (no Salt Lake City screening), but I've seen the DVD, (review coming soon) and all the special features. I've perused his blog The Workbook Project (a work in progress about open source filmmaking and distribution), and listened to all of "this conference is being recorded" (interviews with various DIY luminaries).

Now the guy has gone and written an article for Filmmaker magazine detailing everything I spent months compiling in my brain. It's there for anyone to absorb, but be ready--there's a lot of stuff to cram into your head. All of it good.
Posted by Scott Eggleston