Ever since he strutted his stuff as the rogue space pirate Han Solo in Star Wars, Harrison Ford has always been movie-hero material. He is a franchise actor, not only making the aforementioned role his own, but also several others, most notably Indiana Jones and Jack Ryan. The public will go to a movie just because he is in it, knowing they will get a stalwart, imperfect lead behind that puppy dog face. He is also a pretty good actor, giving depth to many roles that would appear one dimensional on the page, yet made better by his technical skill. The guy is just plain reliable, a movie star with talent to boot. 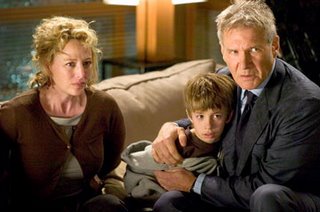 This time around he plays Jack Stanfield, a computer security expert at a large bank in Seattle. Jack’s seemingly perfect life is interrupted when his family is taken hostage by ringleader Bill Cox (Paul Bettany), who has plans to relieve the bank of $100 million dollars. If Jack lends his help, his family will be released unharmed. Due to a merger with another bank, the original plan is foiled and Jack is coerced to get Bill his money or else. Can Jack save his family without committing the ultimate crime?

Unless you’ve never seen a Hollywood thriller, we’ve all been around this block before. Ford again plays the perfect father with the perfect wife (Virginia Madsen) and precocious kids placed in peril. He does a good job, but even he seems to be a bit long in the tooth for a role that requires him (again) to duke it out with bad guys who seem leftover from a Die Hard rewrite.

Director Richard Loncraine (Wimbledon), does a decent job with the material he’s given, but the material he’s given (written by Joe Forte) is mediocre at best. To the film’s credit, the second half is better than the first, but the family in trouble scenario has been done better in other Ford films (like Air Force One) and with more urgency. We also get lots of thriller clichés (like the “plot explanation to the audience scene”, one of the baddies is really a nice guy, showdown in an abandoned building, etc.) that the film would have been better off without. Some of Forte’s dialogue is also pretty bad, beginning with Madsen’s declaration of her hobby to hubby Ford which is “taking care of you” (followed by a smooch, of course).

Another problem with this movie is that I never felt the bad guys were bad enough. Bettany (Wimbledon again!) is a good actor, but here he gets a standard villain role that doesn’t let him do enough sinister stuff. When crossed, he calls his cronies and tells them to break the kneecap of Jack’s kid, but Jack comes on all puppy-doggish and bad guy Bill relents. What? Hans Gruber would never tolerate such insolence! This guy does however, and we never see him as much of a threat.

As with all thrillers, there are going to be some credibility gaps, and Firewall has a few doozies. While it does feel accurate on the banking end, the use of consumer technology seems a bit under-researched. I mean, could Ford really create a portable makeshift scanner with the guts of a fax machine and an iPod? Later in the film, he comes across the ultimate laptop computer which not only can receive a wireless signal from a moving car, but has a battery that lasts hours and hours! Amazing!

What saves Firewall from being a total loss is Ford. With all of this predictable silliness happening around him, he is still sympathetic and convincing as the stressed out Jack, looking for any way possible to save his brood. Because of him, we buy it--at a sharp discount perhaps, but it’s a sale nonetheless.
Posted by Scott Eggleston