A Better Way to Use the Short Film Idea Deck

Some of you have probably heard me babbling on about The Frugal Filmmaker Short Film Idea Deck (you can buy one here), if for no other reason than I keep offering it as a prize to Trivia Monday at the first of each month. I've always liked the idea of gaming/filmmaking crossovers, especially in story creation, and blogged about it a long time ago.

The Idea Deck is a product of that philosophy and when I created it awhile back, my instructions on how to use it were pretty vague. I've been wanting to post an update for awhile now, and this is it! It's nothing revelatory, but if you've used the deck or wanted to get one, this video may clarify the potential that the deck can have to help you craft a short story or film. 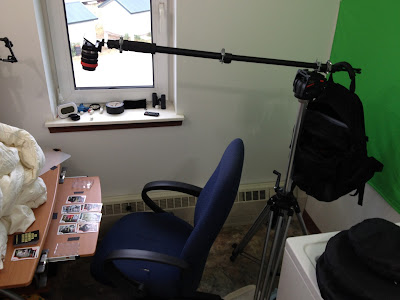 I also would like to point out how I shot this episode, as I'm in my new Alaska digs and am still figuring things out. In the past I've always shot my "tabletop" episodes at an angle, tilting everything on the table to make it look straight on camera.

This time I shot directly over my shoulder by attaching the Eventpod to my tripod's quick release plate, attaching my camera to a mini-ball head on the end of the modified monopod. I used my backpack as a counter weight and spring clamps to keep the sliding keyboard tray in place. If you're wondering why there is a comforter balled up in front of me, it's to absorb my voice and keep it from bouncing all over the room.
Email Post