I'm in Alaska! Now what? 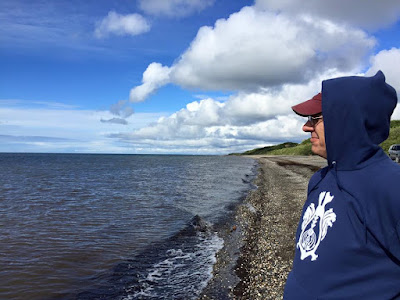 Well, I finally made it. After a long transitional period that landed me in Utah, I was finally called up to the largest (and coldest) state in the Union. I'm now located in a remote corner of Alaska and am finally getting settled. Now the fun begins.

While I sort of had a game plan before, I'm restructuring a bit to adjust to my new situation. Some things are clear and some are not, but I have a better idea about what I want to do here and what I can do here. Not all roads lead to Nome, er, Rome it would seem.

1. The Frugal Filmmaker now lives in the most non-frugal place in the country. Coming from one of the most affordable states (Arkansas) to one of the most expensive (Alaska), has been an eye-opener. Sure, I knew it would be costly, but you're never really sure what you've done until you buy groceries. Everything here costs about two to three times as it does in the "down states", which really limits to what you can buy. A gallon of milk for $10? It really makes you examine your priorities.

The good news is that I can order most of what I need online. Amazon Prime works just fine in Alaska, and I can get plenty of stuff when I need it (with maybe an extra day or two wait). My other favorite source, eBay, also works quite well unless the vendor refuses to ship here. The Chinese sellers are just fine, but there are some U.S. companies that refuse. I find this strange since USPS Priority Mail costs the same as it does to any other state in the States and ships just fine up north.

2. There are no big box retailers in my remote corner of the state. I'll admit it, I'm going to miss Dollar Tree, Home Depot and Wal-Mart. I found all kinds of useful stuff in those stores and appreciated the immediacy at which I could obtain materials for various DIY builds and props. Those stores were always good in a pinch and readily accessible.

While there is an ACE Hardware here (the only real chain store), my future is going to be online. The good news is that I do a lot more web shopping than I do in brick and mortar stores, so I'm going to be okay. When I need some tool or part right away, I'll have to pay through the nose, but if I can plan and think ahead, nothing really changes.

3. There is a data cap on all broadband internet usage. Yep, you heard right. Where $50 in the continental U.S. would get you decent unlimited broadband, here it will cost $150 and you'll only have 30-40 gigs of downloading. This means normal web usage is fine, but my days of binge watching on Netflix are over.

While this may sound like bad news, it really isn't. Not having any streaming options (outside of YouTube) just means that I have more time to develop content for the channel and spend more time making films. Binge watching is really just time-wasting anyway, especially when it involves stuff you've already seen. I am also changing my account from streaming back to DVDs in the mail, so I can still watch newer films as they emerge.

4. There is no obvious film community. A town as small as the one I live in means no film commision and no local arts program to cull talent from. There is no local theatre to find actors and I appear to be the only one here even who shoots video with any regularity.

The good news is that  there is a satellite campus here and it looks very likely that I will be teaching an introductory video production class.  This will not only give me valuable teaching experience, but also contact will people who want to make films. This may not help me when looking for a hair and makeup person, but it does open up crew possibilities. And then there's that guy with a drone...

5. I have no idea what kind of movies to make up here. Living in the lower states gave me a lot of options for making almost anything I could dream up, but that's not the case here. I'm in a small (basically fishing) town with limited locations and extreme weather in the coming months. It's got me perplexed, to say the very least.

Clearly what I need to do is reverse engineer whatever film I do next. Mark Duplass spoke about this recently in his excellent SXSW keynote address, but it's nothing new. Roger Corman did the exact same thing for decades: take inventory of what you have access to, and make a film using all of it. This includes the indigenous population. This may be a once-in-a-lifetime opportunity for me, to make movies that will look and feel like nothing I've ever done before. I can't waste it. And if the weather proves to be a problem, I can always shoot in the summer. They are beautiful up here.

There is no doubt in my mind that living here has many challenges. I can whine and complain about it or take stock it what I can do and make the most of it. There's really only one option, and I look forward to seeing the end result.
Email Post

Unknown said…
Hey, Scott. I'd heard you were moving to Alaska. Hope you're settling in well up there.

What town did you move to? I lived in Alaska for five years traveling all over the state working for hunting guides and lodges. I'm assuming from your joke in the blog post it's Nome, but could be wrong.

There's lots of stuff to shoot out there. I'd recommend getting into remote backpacking if you aren't already into it since it'll inspire you and show you lots of scenic places you can shoot in.

Larned said…
Scott, you might want to take a look at a YouTube channel called ' Dude Like Hella" about a young couple that just moved to Eagle River Alaska. He is a long time YouTuber, and also does a spot on the local Morning TV news.
August 21, 2015 at 6:34:00 AM PDT

rdtradecraft@gmail.com said…
I lived in Soldotna for a while and had trouble adjusting to the prices as well.
The cold I acclimated to in a couple of weeks.
Are you on the Southern or Northern part of the state?
August 28, 2015 at 1:15:00 PM PDT

Joseph St Clair said…
Scott,
You are a super creative guy, I am really looking forward to experiencing the unique kinds of films you will make in Alaska.
August 30, 2015 at 10:39:00 AM PDT