There is a brief scene in my last short film, Invader, that takes place on a rooftop. It was in the middle of a cloudless day and harsh sunlight poured down everywhere. It looked great on camera, but trying to see my external monitor was all but impossible. I ended up using a black t-shirt to cover my head and the monitor, but I really needed a monitor shade.

While I had tried several eBay options in the recent past, none of them really worked. One was a great idea, a carry case that unzipped on one side to form a hood. It was too small to hold my monitor. Another was a simple shade that attached with velcro. I wasn't impressed by the coverage and it was just barely attached. What if I had to pull out the shirt again? Would it hold?

What I needed was a monitor hood that covered all for sides, was sturdy, and was affordable. I found one I really liked, but didn't feel justified in spending $30-35 to get it. Examining the design, it appeared that it was just a well-made plastic box. That's when it hit me. What about the plastic insert from the Stealth Camera Bag? It was made to hold a six-pack of soda or beer, but would it be the right size for a 7" monitor? I had to find out.

As it turns out, it was the perfect size. My monitor rested nicely into the bottom of the insert. All I really had to do was cut or drill several holes to accommodate the mounting thread, power connector, HDMI port and several extra holes for venting. All these were done with some guesswork and a drill, with the exception of the HDMI hole, which needed some extra labor with a knife.

Now I have a handy monitor hood that cost me nothing, effectively shades my monitor and fits right back into my "camera bag" for easy storage and transport. Bring on the sun! I'm ready. 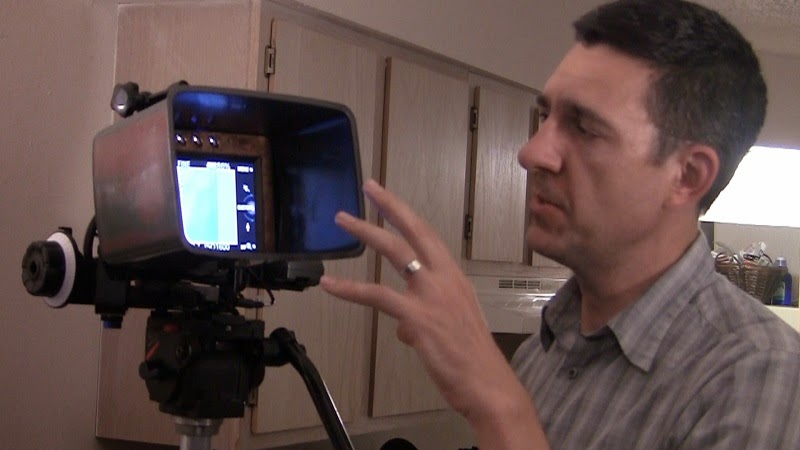 Michal said…
That seems to be one of the ideas I like the most - simple usage of simple things to keep difficult tasks managable :D THAT is why filmmaking is called a creative job! :)
October 8, 2014 at 1:45:00 PM PDT