Help Scott raise the budget for his thesis film "Collection Day"! The Kickstarter campaign runs until the end of August.

When I bought the Sony NEX 5n interchangeable lens camera, I knew it was small. I didn't have a problem with that. After all, it was always going to be on a tripod or rig when I shot video. When I started poking around with shooting still images, the small size became more of an issue. After a while, my large hands were cramping from trying to hold the tiny thing.

I thought I had solved the problem previously, but then I began using large, long lenses and my wrist started screaming at me. I needed something that secured two sides of the camera, gave me something larger to wrap my gorilla hands around, and provides a better rest for my focusing hand.

The Frugal Fattener does just that, makes a small camera comfortably larger, even with a large, heavy lens. The parts are cheap on eBay, it's easy to assemble, and it's small enough to transport in a backpack or cargo pants pocket. Nifty! 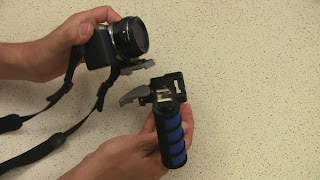