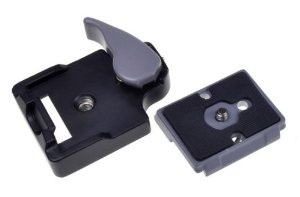 UPDATE: Turns out there is a version of the correct Manfrotto Clone on eBay, and it's even a couple of bucks cheaper!  Thanks to Zach Wong for pointing this out on the Facebook Group.

If you've been looking for an inexpensive quick-release system to add to your many camera rigs, you would have been out of luck.  Both the Sima Quickonnect (a favorite of The Frugal Filmmaker in the past) and the Manfrotto 323 RC2 Clone (here's the original for comparison) have been out of stock at Amazon for at least a month.

Now, the Manfrotto Clone is back, and even if the price is a wee bit higher than what it has been in the past, it's good to know that you can buy them again. These are very well-built knock-offs and if you want to give all of your camera gear fast interchangibility with your camera, you are going to want a few of these.

While I feel the Manfrotto Clone is still the overall best of the cheap quick release systems, I still use my Simas for small gear with a more compact profile. Sadly, the Quickonnects seem to be gone forever (they've been out of stock for a long time), even though they are still listed on Amazon. Sometimes they still pop up new on eBay, but the price is so outrageous that you shouldn't even bother.

With all this demand and no supply, I've been pondering a DIY quick release system and might have a winner. It won't be as robust (or cost as much) as the Manfrotto Clone, but could come in handy, especially when the supply runs out (again) and we are left with no options.  Look for the "Frugal Fast Release" in the near future.

P.S. Make sure you don't get duped into buying the cheaper version of the Manfrotto 323 RC2, as the base plates on these fake-fakes don't have any threads (check the photos).  This makes it more difficult (though not impossible) to attach to your rigs and makes them less universal. I don't recommend them.
Email Post

DIYFilmSchool.net said…
Thanks for the update, Scott! It'll be interesting to see what you've come up with in your Fast Release.
February 20, 2013 at 7:11:00 AM PST