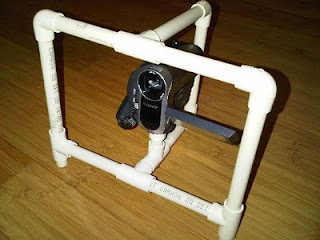 Here's Wayne's version of the PVC stabilizer rig. It looks very true to form, with the exception of some extra PVC poking out from the bottom two T-joints. My guess is Wayne raised the whole rig a bit due to the "extra thread" issue some have had due to the length of the 1/4" bolt that holds the camera to the rig. Adding a nut between the bolt head and the rig (on the bottom) shortens the bolt that goes into the camera, but also prevents the rig from resting properly on the three "feet". Matthew Sorrels added a third T-joint foot, Wayne seems to have just raised the front two.