Ever had a shoot, but no boom operator to record sound? I had this issue recently, which would normally be solved by using a boom mic stand, but alas, mine is long gone. Since I had no time to order a replacement and no resources to by locally, I had to make something from existing parts.

What I came up with actually worked pretty well. Dubbed the "Frugal Boom Clamp", I attached two friction arm clamps (which had 1/4-20" threads) on both ends of a straight, dual flash bracket. This would not only firmly hold a boom pole, but also had a threaded hole for a tripod quick release plate. Presto! Done!

Now I can mount the Frugal Boom Clamp onto a spare tripod, and easily grip the pole in two places. This solves my problem, and also allows my to gently pan and tilt the mic during a shoot if needed. The whole thing took minutes to make and only cost $15 (if parts are bought new). Not bad. 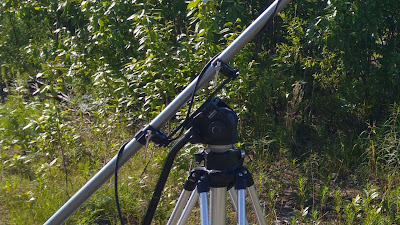