Wind noise sucks. Nothing will alert a viewer to an amateur production faster than bad audio, and wind blowing on your mic sounds terrible. While a fuzzy windscreen (or "dead cat") is more commonly seen on boom mics, there are also smaller versions for lavs that do the same things for interviews or videoblogging.

Shooting outdoors can give you all kinds of challenges and audio is no different. I've been using a temporary setup recently, where the only possible place for me to shoot is outside. I haven't had any wind issues until recently, and then found that my foam windscreen was less than up to the task. I knew fuzzy windscreens were better, with their awesome sound-trapping capabilities, but I didn't want to shell out $20.

In the past I remember a YouTuber using a fuzzy glove to insulate his Zoom H1 audio recorder from the wind and felt that that glove could be put to the same use for lav mics. I found a cheap pair on eBay and gave it a try. Not only did it work, but it gave me nine other windscreens to use on other mics or to have as spares. Not bad for a couple of bucks.

As shown in the video, these little sound protectors can really tone down (notice I didn't say eliminate) the obnoxious wind that can blow on your mic when shooting outside. They can be a lifesaver and can make the difference in your production looking professional instead of shoddy. 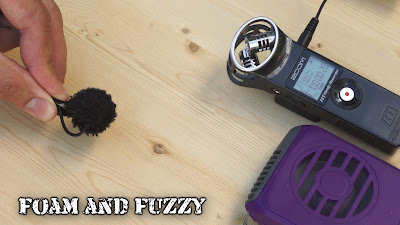