One prop that I needed for my thesis film, Collection Day, was a sonic grenade. The script called for a non-lethal weapon (though I think the non-lethal part got lost in translation) that would emit a sonic shockwave, knocking out everyone within the blast radius. I wanted something that was obviously a grenade, but looked more near-future than contemporary models.

Something I really wanted was real interactivity between the prop and actor. If you've watched any of my videos about using airsoft guns as movie props, you know how much I like gas blow back guns and the realism they add. No actor has to fake anything when the props they are using "act" like the real thing.

So it was with the grenade. Though I wanted it to look different, I wanted a pin to pull and a spoon (the thin piece of metal you release when you want the countdown to begin) to realistically fly off when let go. I also didn't want to have to build everything. I thought the futuristic body or shell could be easily created, but I wanted a mechanism that was pre-made. It may be simple, but it contains moving parts that I didn't have time to construct.

I discovered that you could find inert dummy grenade repair kits online. These contained the spring mechanism, pin and spoon. You can add these kits to almost anything and they will look like a grenade. A green spoon is an added bit of realism as the blue versions are to alert the user these are practice grenades and not live. Green is the real deal in the real world. Paint is another option.

I then added a 2x6" rectangle of 1" pyramid acoustical foam. This wrapped perfectly around the PVC coupler (attached with spray glue) and made the prop look like a futuristic pineapple grenade. The acoustic foam also lent to the effect of a sonic weapon. After spray painting it black and using epoxy to attach the spring section into the hole, it looked and worked great. 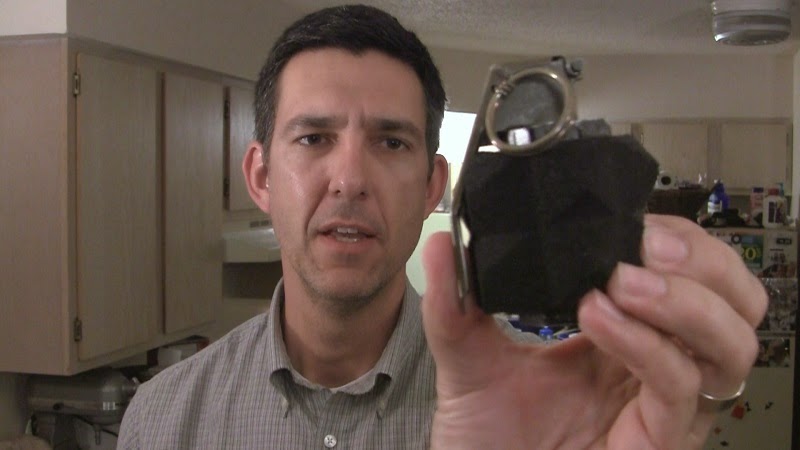 A secret to using custom props on screen is never to show too much. Unless you have a prop building master at your disposal, you might want to keep your cuts short and avoid closeups. This will hide your cheap concoction and carry the illusion to all but those who choose to freeze-frame your movie for closer scrutiny.

As always, alert local law enforcement and everyone else around if you are displaying prop weapons in public. They may look so realistic that someone gets very worried. Play it smart and let the neighbors and local authorities know what you are doing. Posting signs such as "Film Shoot in Progress" is other way to let people know that what you are doing is fake and not worthy of panic.
Email Post