In the past, I published a video that covered using an airsoft spring rifle, then another that showed the effects of removing the spring for a more realistic bolt action. This time, I've got some observations that illustrate how to up the authenticity when using a gas blow back airsoft pistol as an on-set prop.

The first item covers the issue of getting your gun to fire when empty, as many semi-automatic airsoft pistols will lock back the slide when you run out of ammo, just like the real thing. Unless you want to load the thing with BBs and deal with them flying all over your set, this needs to be addressed.

The second is the classic battle between green gas and propane. While both are basically the same, green gas is more expensive, while "real" propane (found at any hardware store) smells something awful (and your wife always knows when your testing out your props). You'll need an adapter to charge your airsoft props with propane, but you might be surprised why I go anti-frugal and pick the more expensive green gas in this instance. 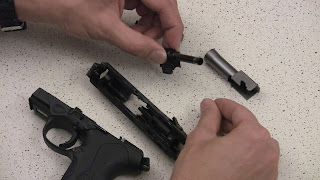 Another issue (which I've never seen addressed elsewhere) is the issue of a narrow gun barrel. On pistols, it's a dead giveaway that you are using an airsoft clone if the audience can see into the the barrel of the gun. It looks unrealistically smaller than the real thing. I tried to hide that fact with a simple trick that anyone can pull off, provided you know how to field strip your prop weapon.

I learn a bunch of stuff every time I make a film, and this is just one of several videos I plan on making about things I learned making Collection Day.
Email Post

Unknown said…
Do be careful, as recently, a teenager with an Airsoft assalt rifle was shot dead by police in Santa Rosa, California. Realistic Toy weapons can put your life in jeopardy if you don't let people know what is happening around them.
December 8, 2013 at 12:06:00 PM PST

airsoft rifles said…
Just like the actual thing. Unless you need to load the thing with BBs and deal with them hovering all over your set, this wants to be addressed.
September 11, 2018 at 6:00:00 AM PDT