The Making of "Collection Day": Day 2

Our second day of shooting landed us in a glass conference room, which was a slight change from the glass office mentioned in the script. One of the visual themes in the film is glass, which also happens to be the last name of our protagonist. I had searched high and low for such an office with no luck. When sharing this frustration with one of my thesis committee members, he suggested a high-tech dental office.

Further investigation put me in touch with the owner, whom I discovered was looking for someone to shoot a commercial for his business. When I agreed to that, I had my location. Scary fact: this location was literally secured the day before we were scheduled to shoot our scene. This was a recurring nightmare that plagued this film. I was constantly looking for hard-to-find locations that would miraculously materialize at the last second. Not fun. 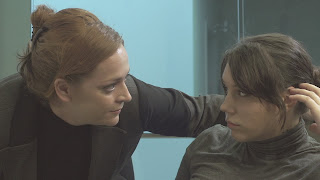 Once we were there (the next morning), things began moving along and we dealt with new issues. Two glass walls opposite each other caused reflection issues. One blank wall that looked so awful, I was determined never to show it (it still got in there a few times). We were in a location I had only seen on the web, and had to quickly assess and modify my storyboard/shot list, and the clock was ticking...

Paul Bellah said…
So much stress yet you appear very calm. Must have been a good shoot. Cheers.