For my upcoming thesis film, Collection Day, there is some gunplay involved. One scene features a shootout involving an assault rifle and I wanted to add some realism to this scene. Though I won't be using blanks (I don't want the danger or the noise), I still wanted more from the rifle than just the "actor shakes the prop" effect.

To attempt this effect, I first tried installing a vibrating motor into a smaller prop gun as a test. The above video shows this attempt, which was only sort of successful. In my opinion, the gun doesn't vibrate enough and this lends to problems when I try it on a heavier, full scale G36c replica.

I would still like to pull this off, but need some suggestions.  Any ideas? 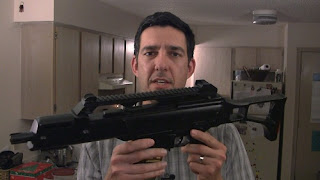 Unknown said…
W/O blanks, not sure you're going to get a realistic recoil effect in other ways. Paint ball guns have some recoil, but adding vibration to your model LMG won't look so hot IMO. Those suckers jump when you pull the trigger.
April 18, 2013 at 11:32:00 AM PDT

Unknown said…
You can always train your actors to act the recoil, which is probably easier then it sounds, and you already have an airsoft weapon which should give you some bolt movement when the action is cycling which should help your actors with their acting. Also, have the actor using the weapon USE the thing for a while; shoot it, safe it, reload it, practice the recoil with it. Even with blanks, there's not going to be much, if any recoil. /.02

Anonymous said…
Hmmm.. let's see.
I think the worst part is that you'd need something kinda strong to actually make some sort of effect.
I remember I had this BB gun ages ago which would give some sort of feedback (can't even call it recoil) when you shot... it indeed had something that would go up and down the body instead of a rotating motor.
Now, if it was a one shot-recharge thing this could be accomplished with a spring and something heavy alone, but since it's semi-auto or full-auto, makes the whole thing a bit harder...
April 18, 2013 at 12:15:00 PM PDT

Joe Falcon said…
You can try more weight for it to spin and slow the rotation down, not to mention you don't want it balanced or constant on but to swing in burts, also put it where the weight will be able to work against your grip.

The firing a rifle is bursts where the force is pushing the muzzle up and back, why you do short burts so you can stay on target.

There really is no easy cheap way to simulate recoil. You might actually have something with the spinning weight.
April 18, 2013 at 2:35:00 PM PDT

Unknown said…
Most of the recoil from a gun comes from the end of the barrel. You might try moving the vibrating motor as close to the end of the gun as possible. Also, either use a lower power battery or add a resistor to slow down the motor a bit. I've tried this before and it works quite well.
April 19, 2013 at 10:40:00 AM PDT

Unknown said…
Try using a battery operated reciprocating saw. You can pick them up for around $20-$25 bucks at harbor freight. This should mimic machine gun shake. They also feature speed control... just a thought
April 21, 2013 at 2:18:00 PM PDT

Anonymous said…
Short of using blanks, which is probably the most practical and cost effective option, the only other option is to literally put it in the hands of your actor(s) to give you a convincing performance. Perhaps they can research their role by firing a few rounds at a local firing range in order to get a feel for what real recoil feels like; perhaps even film the session so they can see themselves in action and practice in a mirror. I think any option apart from the two above is simply a waste of your time and money. Hope this helps.
April 22, 2013 at 4:47:00 AM PDT

Unknown said…
I'd just go ahead and train the actors on recoil. Even using blanks, without a blank adapter, you won't get much, if any recoil. If you lived close, we could always take your actors shooting and give them an idea what it's all about. . . I don't think your vibration idea will be what you want.
April 22, 2013 at 7:43:00 AM PDT

Scott Eggleston said…
Thanks for the input everyone! I think I'm moving toward automatic 12v car door locks. They are only $8 and might give me the effect I'm looking for.
April 22, 2013 at 9:22:00 AM PDT

Anonymous said…
I think I'd ask if it has to fire on full auto? One to three shot bursts might be more realistic and a bit easier to model. Unless you want your guy to have to change magazines...
April 24, 2013 at 9:04:00 AM PDT