Here's a short promotional video I recently created for a client. I liked the fact that they wanted me to tell a story rather than just pimp the product. I love working with talented people and we had some good ones not only in front of the camera (I had worked with Jessica Pearce previously on Midnyte), but behind as well.

Chris Henderson is an excellent AD/line producer (he's incredibly organized) and Doug Clift does anything you want with everything he has. I also want to speak highly of Josh Rowley our sound guy and Rochelle Jahdi (also from Midnyte) who did an excellent job with costumes and makeup.

All in all, a good experience. Most importantly, the client was happy. 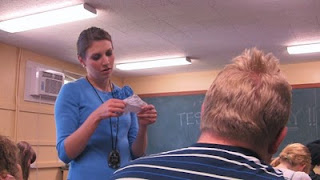 My favorite anecdote from this project was the fact that I forgot to separately record the students laughing as a result of Brain Lame Guy (Jeffrey Lee Blake) trying to sing the ABC song. I completely overlooked this and was thinking I'd have to record it somewhere else. Fortunately, I found a bit of footage where Jessica cracked a joke after a take was over and the class laughed. Those laughs are in the video.

It was also fun working with my daughter, Melanie. She's an extra sitting in the front row. Watch for her standing up when Jessica becomes the most intense teacher in recent memory.
Email Post

DIYFilmSchool.net said…
Sounds like you had a good time doing this. One guideline I've found true: if the client is happy, all misfires or personal opinions don't matter.
February 3, 2013 at 6:49:00 AM PST