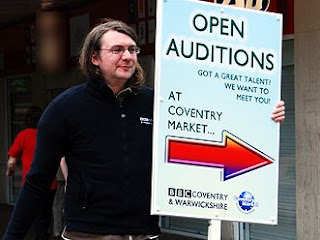 So you’ve written a brilliant screenplay, you’ve found a spectacular crew, and you’ve applied for three separate shiny new credit cards. You’re ready to make your film. Now you need to cast it.

Whether you’re making a short, a feature-length film, or an entire web series, casting the right actors is, in my opinion, the single most important aspect of filmmaking. Yes, even more important than having a taut, compelling script. You can write dazzling, poetic dialogue, but if it’s delivered by a stiff, monotone mouth-breather, it will fall flat. On the flip side, a great actor can actually mask deficiencies in the script with his face or body language. (This isn’t to say that an intriguing story isn’t important; it absolutely is!)

Now I am not a casting director, but as a writer/actor/director I have been on both sides of the audition table, so I hope you’ll find my perspective helpful.

Let’s start with the casting call. Now there is an industry standard for an official casting notice (it includes a short plot synopsis, character breakdowns, pay scale, etc.), but we’re not talking about the industry standard here. We’re talking about a casting call for your micro-budget film. You can make it read however you want, and you can include whatever information you feel is relevant. But here are some things to consider:

Your casting call is the first impression of your film that you’re sending out into the world. Make sure it accurately reflects the kind of production you’re developing. If you send your script to L.A. and have Breakdown Services create your casting call, actors are going to expect a highly professional film with a large budget and are going to feel swindled when they show up for the auditions in your garage and read opposite your grandma. Likewise, if your casting call gives little or no information about the actual film or characters and is riddled with spelling and grammatical errors, actors will think you are disorganized (which you probably are) and have no idea what you’re doing (which you probably don’t), so don’t expect a big turnout. (By the way, unless you have no other choice, don’t hold auditions in your garage.)

Your casting call should probably include the following information:

Brief (one or two line) description of each character.

Projected timeline for the production.

Time, date and location of the auditions. (You would be surprised at how many audition notices I’ve seen that forget to include this info.)

Compensation (Copy and credit is fine. You’re making a micro-budget film and you can’t afford to pay the actors? That’s okay, but be upfront about it.)

Attach audition sides, or provide a link. (Don’t make people email you for the sides. There are plenty of tools on the internet, like Sendspace or Dropbox, where you can easily link to the sides.)

Choose your audition sides carefully. Make sure the scene gives the actors an opportunity to really show what they can do. Also make sure the scene is representative of the work as a whole, both in character and tone. Some actors are uncomfortable using profanity and will feel tricked if the audition scene is a squeaky-clean conversation about family values, and then you surprise them later with 183 F-bombs.

Now this next part is VERY IMPORTANT: Your sides need to be from the actual script that you intend to produce!!! Okay, if you’re paying scale, use whatever sides you want; but if you’re paying anything less than scale, be aware that you are auditioning for the actors every bit as much as they are auditioning for you. It’s for this reason that I say don’t make the actors email you for the sides. As an actor, if I have to email an independent producer for the sides to a micro-budget film for which actors are not being paid, I am automatically skeptical of the quality of the film. I feel like they’re keeping things under wraps because they themselves are not confident with the quality of their screenplay. But the fact is, you don’t want people auditioning for you who don’t want to be a part of THIS project, especially if you’re not paying them. If they don’t love your script, they’re not right for your film. I cannot stress this enough.

Be as upfront and honest as possible about EVERYTHING. Obviously you don’t want to be divulging details about how the film ends to just anyone, but always be honest. Don’t downplay the commitment you expect from your actors (and your crew for that matter), and don’t make promises you can’t keep. If you do this, your production is going to fall apart midway through when people feel deceived and become resentful. Be upfront. If the actors can’t make the commitment you’re asking of them, then they are not right for your film.

On a micro-budget film, when you aren’t paying the actors or can’t pay them very much it is all the more important that they love the film you’re making. Otherwise every day on set will be drudgery. (That is, if the actors don’t bail on you at the last second for something they would rather do.)

In the next post, we’ll discuss holding the actual auditions.

CHRIS HENDERSON is the writer and executive producer for the upcoming series “The Gap.” He graduated from the University of Utah with a B.A. in Film (focus on Screenwriting), and has worked full-time as an actor/writer/director/producer in the film/theatre/television industry of Salt Lake City for over 10 years. Check out “The Gap” on facebook at: http://www.facebook.com/pages/The-Gap/120242371339975
Email Post

Ed Love said…
Very interesting & practical, thanks! A tiny request: please don't use yellow. It looks great on your website but lousy via RSS readers :(

Ed Love said…
Sorry, scratch that last one. I just clicked on the link & read the article on your website. Perfect.