Are you Frugal enough to Use a Pink Camera? 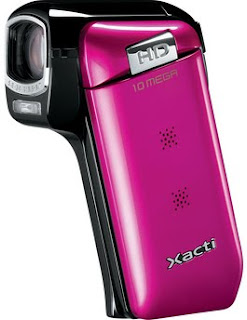 Some of you may recall me mentioning Sanyo’s CG10 as a great frugal cam. It lets you shoot in 720p HD to an SD card and allows you to lock focus and exposure. Throw in macro focusing and a web cam mode (perfect for shooting stop motion with MonkeyJam) and you’ve got a versatile little powerhouse! That kind of control is unheard of in a camera this small and inexpensive.

Just for the record, these cameras aren’t perfect. The image they produce is nowhere near my Canon HFS100 (or the current HFS200), which retails for $600 more. They also lack mic inputs and headphone jacks, so audio recording is limited to the on-camera mic with AGC. They have also been criticized for having no Optical Image Stabilizer which lends to a potentially jittery image. Did I mention they don’t come with AC adapters?

These problems are easy to address. You’ll have to record double-system audio (sound separate from picture and snyc in post) which is what everyone using DSLRs is doing right now. To make handheld shooting workable, build a stabilizer rig for $5. They work great with this kind of camera. As for power, your battery will last for 80 minutes--use it wisely.

I bought three of the black versions for a good price--$124 each. Now the pink ones are selling for $5 less than that (use the saved money to build a rig!). The question is, are you willing to be caught using a “girlie” colored video camera all for the sake of being frugal?