Is the Canon Rebel T2i the Perfect Frugal Cam? 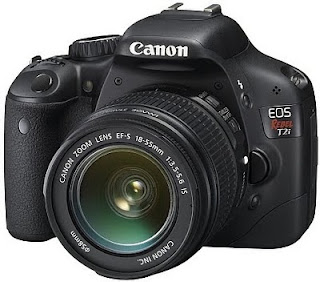 People interested in video production are buzzing about Canon's latest DSLR, the EOS Rebel T2i. It seems that this little camera has many of the features as its cousin, the 7D, but with enhanced video modes and half the price tag. It will sell for $799 for the body only or $899 with a standard lens. Considering I recently purchased Canon's VIXIA HFS100 video camera for $899 (now available for $799), I have to ask myself if I made the right decision.

The T2i shoots HD video at 1080p in 30, 25 and 24 frames per second. It also shoots 720p at those same rates, and adds 50 and 60 frames per second, which should create some silky smooth slow motion. It allows for full control of exposure, shallow depth of field and interchangeable lenses. Not to mention the fact you get an amazing 18 megapixel still camera. Full details can be found here.

So what's not to like? Well, there is no autofocus, which comes in pretty handy in run-and-gun situations. There is an external mic input, but no headphone jack and no manual audio control. This means you can't monitor the sound coming into the camera and once it's there, the camera runs the level. It's the return of the dreaded AGC (Automatic Gain Control). Yuck!

While no one has seen any test footage yet, my guess is we have another DSLR that will shoot some very pretty pictures (at the most affordable price point), but be very lacking in the audio arena. If you want to use this camera for any kind of real shoot, it means double system sound, or recording audio on a separate recorder. This isn't horrible, but means one more piece of gear and the annoyance of capturing and syncing in post.

To me, this is a deal breaker. While my HFS100 won't produce an image as sweet as the T2i, it can record audio through an external mic (via an XLR adapter) using a level that I can control. Manual audio will always sound better than AGC. And it has autofocus!

Unknown said…
But really you buy the DSLR for the DOF...... The zoom H2 can handle audio plenty fine and costs very little. It can be mounted to a boom and it will give a great performance. It really just depends on how much you control.
March 20, 2010 at 8:59:00 AM PDT

Scott Eggleston said…
I agree with you, Chris. I just wish it was more "all-around" and was easier to operate by one person like a traditional video camera.
March 20, 2010 at 9:15:00 AM PDT

LightsOutKid said…
I just got the T2i. You connect an XLR box to it and you can use your boom and your shotgun mics or mount a shotgun to your camera without issue. True you have no sound monitor, but you are not left with only the independent audio and synch option.
April 15, 2010 at 10:32:00 AM PDT

Scott Eggleston said…
I just can't stand any form of AGC (Auto Gain Control), as it really wreaks havoc on your audio. If it's too quiet the camera will boost the signal in an attempt to hear something. It's really awful. Not being able to see levels or adjust them is why so many DSLRers go double system.
April 15, 2010 at 3:37:00 PM PDT

Noah said…
JuicedLink makes a box with XLR jacks that deactivates AGC, and BeachTek too.That would solve some problems with audio.
April 16, 2010 at 6:06:00 PM PDT

Scott Eggleston said…
Just found out that the trick used by some XLR adapters or the DIY method (send a tone to one stereo channel and record on the other) doesn't work on the T2i, which only records mono sound.
April 26, 2010 at 6:24:00 AM PDT

DAVID FREY said…
Firstly, I really like the blog. Alot of good info and easy to navigate.

I don't think canon is to blame here. Let's be fair. DSLR's were designed for still photography. The introduction of high quality HD footage was just so photographers could incoorperate video with their stories. With that in mind, it's easy to see why good audio wasn't a big concern.

I don't think you can beat a camera like the T2i for the money.
For under $1000, you get stunning HD footage, interchangable lens options, full manual adjustments, and great low light performance.

a similar performing camcorder could easily cost $3300 alone, not including a mic set up.

Having just worked on a feature film, using the Panasonic GH1, and a secondary sound rig, I'm a believer. As much as I dislike the idea of having to look for someone to run sound, the results were well worth it.

I agree with your philosophy, "look at what other's have done". Hollywood has used seperate sound recording for years, and well... we know how well it's surved them.

Sean said…
For the money you will simply never be able to beat what you can do with the t2i with the HFS100. For a $300 the h4n zoom erases all of your complaints about the audio. You'll never be able to get the fantastic DoF with the HFS100 or any other video camera for even 3 times the price that you can with the t2i...preciously because it doesn't have autofocus. The interchangeable lens is just icing on the cake. Serious film makers are using DSLR now to makes great films and the entire season finale of House was filmed with just 3 5DMII's. It takes more skill than simply pointing and shooting but that's half the fun.

Scott Eggleston said…
It still boils down to what you need it for and how much you want to spend to make it workable (separate audio recorder, external monitor, shoulder rig). I think the DSLRs are great specialty devices, but I need a camera that won't overheat, records sound single-system, and lets me reposition the lcd. All for the asking price, not more.

As far a "serious filmmaking" goes, it wasn't that long ago that film was the only serious medium. Now it's everything. You can make a great film on a cell phone if you know what you are doing. Which is all that really matters anyway.
July 12, 2010 at 7:00:00 PM PDT

Patrick said…
What about using an Azden Wireless set-up and then doubling up the tracks to make it stereo? Correct/adjust sound in Post.
July 31, 2010 at 2:57:00 PM PDT

Anonymous said…
I'm thinking about getting this camera. To be honest it not having a headphone port only makes me scratch my head because it records sound. Seems like it would have been an obvious add on. But it never came to mind as a pro or con for actually purchasing the cam, because if you're a serious filmmaker then sound should be just as important as image. And you'd never want to record sound directly from a camera, but a separate recorder and synch in post.

Mike said…
Scott Eggleston is wrong btw...the internal mic only records in mono but any external mic going into the mic jack will record in stereoooo.
November 27, 2010 at 10:47:00 PM PST

Anonymous said…
If you get the Magic Lantern firmware you can disable the AGC and it also lets you display audio levels on the LCD. It may be something to consider. Magic Lantern is also free.
January 18, 2011 at 11:56:00 AM PST

djmike1129 said…
Hi, I purchased the canon t2i last august. Has anyone had a problem plugging in an external mic? When I used an external mic I got hissing in the background. Sometimes I got loud crackling but no audio from the subject being vidoed. I figured it was the internal connection so I returned it. They couldn't fix the problem so bestbuy gave me a brand new camera. With the new camera I plugged my shotgun mic into the camera and still got hissing. Very dissapointed. I'll try another mic and cable to make sure it's not the mic or cable.
February 7, 2011 at 12:28:00 PM PST

Unknown said…
Syncing in post took me 2 1/2 months of work for a 3+ hour project. That amount of work is non-trivial. Life is short - I want a camera that can catch the audio. "Just sync it in post." is nonsense. I hope I never have to do it again. If I get a t2i I'll plug the mics into a small mixer, send the mixer to the camera, take a headphone-out off the mixer and load the Magic Lantern firmware. If there's hiss, I'll use Waves X-noise in post. No prob.
March 27, 2011 at 5:01:00 PM PDT

Vicki H said…
I am not sure why syncing audio in post has caused some people such headaches. I have always done it in post. Usually syncing 2 Z1U clips so I could cut back and forth TV style from 2 cameras on set.

Since Film takes have clapper board type intros for each take it seems like syncing the audio would only need to have someone speak the scene/take just before the audio spike that you sync to.

That way you are sure that your audio clip goes with the video clip you are trying to sync.

hnatkowicz said…
OK, great information all around... BUT I am an HFS100 owner (x2) and am thinking about selling both for one T2i. I have a JAG35, lots of FD lenses, and plenty of other accoutrements. Should I bail on my video cameras and their assorted piles of accessories for the T2i?

DIYFilmSchool.net said…
I know this is FAR beyond the original post date of this review, but I want to provide my experience if you'll allow it.

I don't think the T2i is the perfect frugal DSLR. I may have been when it was released, but now, even with newer models like the T4i or even T3 available, the T3i (to me) is the best frugal DSLR.

That model has everything I need, and it solved some inherent issues the T2i had -- namely the overheating issue.

The on-camera mic is good enough to capture some dialogue, but as always, you should shoot dual sound. Synching in post is simple with PluralEyes (which may not have been available when the T2i was originally released).