'The Cult of Sincerity' and the YouTube Distribution Model 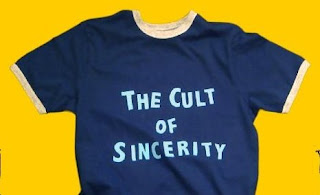 Last week I viewed the first feature length film to premiere on YouTube, The Cult of Sincerity. It follows the lead character, Joseph, in his quest to escape the mediocre life that has befallen him and all of his old college friends. He does his by attempting to eliminate sarcasm and irony from his life as well as helping all those around him. It's a good little film with nice performances, some funny writing, good production values, and (for once) a positive, upbeat message.

The filmmakers (co-directors Adam Browne and Brendan Choisnet, and producer/writer Daniel Nayeri) have struck a bargain with the indie music site Amie Street, to snag a bit of cash. If you sign up via the Cult link, you get two bucks of free music credit, and the movie makers also get two bucks. Not bad. Sign up for three dollars, and the boys get one buck, charity gets two more, and you get to download the movie to your computer.

This last part is important, because YouTube's compression on Cult is so bad, it almost makes the film unwatchable. I'm not sure if it's due to the length of the project, or just poor encoding choices, but it is a problem. Fortunately, the quality of the movie still comes through, but the pixelating and picture breakup is really an issue. I was tempted to go ahead and get the $3 download, but felt the film wasn't great enough for me to revisit. If you do, you should spend the three bones, as anything will be better than what you get on the Tube.

This is also the second time that a full-length indie has come to YouTube with some sort of collaborative deal that bumps some coin back to the creators. Remember Four Eyed Monsters? Arin and Susan's deal with Spout (sign up through the FEM link and they get $1) was a first, and gave some incentive (they took in over $40,000), which we can see with Cult.

I love the idea of putting an entire film on the web (and especially YouTube, which millions of people visit), but wonder about the viability. As mentioned above, the video quality has to be better. A crappy picture will take you out of the mood quickly, and you'll lose your audience. So far, the number of views are at 17,000 plus, but how many of those watched the entire movie? Again, I'm not sure if this is an YouTube issue or not (FEM looked pretty decent, as I recall), but has to be fixed. I'd be infuriated if my movie looked like that to a worldwide audience.

Size also seems to be an issue. The tiny screen on the Tube is okay for short stuff, but generates eye strain for long periods. Go full screen and it looks like your watching through a fish tank. Recent history has proven that folks will watch movies on a small screen, but iPods have a razor sharp image, something we don't get here. Check out what director David Lynch had to say about his films viewed on a screen the size of a postage stamp. Pretty funny.

No one has been able to breakout with a giant web-based hit yet. I am always encouraged by resourceful filmmakers who keep trying new things to get their work out there, and try to make a buck. It will happen, and I can't wait to see whatever product drives millions of people to their computers (or set-top boxes) to watch it. It's very exciting, and it's most definitely the future.
Email Post

Allan W. said…
For the life of me, I don't know why people who care about quality video stick with YouTube. Blip.tv and Vimeo are technically superior, giving you complete control over formats, sizes, and compression quality.

Scott Eggleston said…
Yep, those sites are much better to watch (Vimeo supports HD), but you can't escape the traffic numbers on YouTube.
May 1, 2008 at 6:36:00 AM PDT