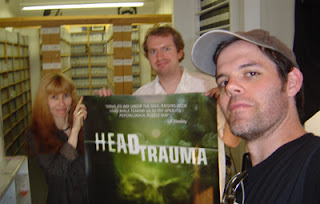 I don't think Lance Weiler sleeps. And has clones of himself. And three arms. How else can you explain all the stuff he is doing?

On his excellent blog, the Workbook Project, he continues his series of interviews under "This Conference is Being Recorded." Recently, he interviewed Joe Swanberg, who makes low-budget movies that are largely unscripted and created on the fly. He is a true guerrilla, using friends and their property (he cites Robert Altman as an inspiration) to work out his films as he goes. He has played several festivals and even has made some DVD deals. It may not be my cup of tea, but Joe is making movies hand-over-fist, and there is a lot to learn from what he has to say here.

Lance also just returned from the South by Southwest (SXSW) film festival in Austin, Texas. There, he spoke on several panels about indie distribution and blogging about movies (hey, where was my invite?). On CinemaTech, I found some video (provided by sprout.com) of Lance and several others sharing some of their filmmaking experiences. It's fairly lightweight, but still interesting, and I always like listening to passionate people who get a chance to conversate.

If you're curious about what's new with Lance's last movie, Head Trauma, check out the blog here. It appears the film will be getting some more press and Lance speaks mentions where he will be pitching two more of his scripts, both of which remain in the horror genre.

Keep it up, Lance. You're an inspiration to all us little guys with big dreams.
Email Post
Labels: DIY films