Every time I sit down to record a YouTube video, I use a lav mic. This is a small microphone that clips to your clothing, near your mouth, that allows you to easily capture sound from the person it is attached to. It is much easier to use than an boom mic and you don’t need an operator (or stand) to implement it properly. It’s a perfect microphone for one-man-band YouTubing.

The microphone I’ve used ever since starting the Frugal Filmmaker has been the Radio Shack Tie-Clip mic, probably because it used to be so easy to get one (especially before RS closed half of their stores). It was an affordable $30 and produced decent sound for an unbalanced (non-XLR) microphone. It has been happy partners with my Zoom H1 Handy Recorder for some time now.

Aspen Mics recently contacted me and asked if I would review one of their lav mics and I agreed. Similarly priced, I was curious to hear the difference between this new mic and my old one, and looked forward to doing an A/B comparison.

The above video is a finding of my results. The Aspen is a well-made mic that sounds identical to my Radio Shack model, but needs no batteries. It’s a good looking mic, with a great cord length for mounting to a concealed recorder. It’s about $12 more expensive than the RS version, but that may be negligible when the price of batteries are added in. 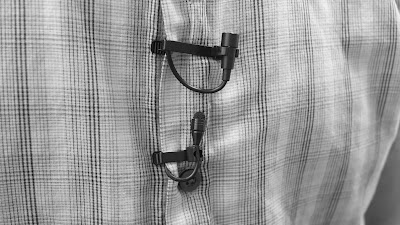 I recently bought a Aspen, based on
http://cheesycam.com/affordable-quality-sound-aspenmics-lavalier-microphone-for-dslr-video/

I've tried it with several of my ZOOM recorders, H1, H2N, Tascam, Olymus recorder, Teac, and it now my favorite lav mic.


I own several Giant Squid mics too, and like them... haven't tried there latest ones under new manufacture.
http://www.giantsquidaudiolab.com

I had a RS mic too... but mine didn't seem as good as yours, and didn't like the battery requirement.

Sure enjoy your Blog.
Rob

Scott Eggleston said…
Thanks Rob, I'm glad you are getting something useful out of the content. Thanks also for the rundown of other affordable lav mics, it's good information for anyone needing this kind of thing. I think the Aspen may be my new lav mic of choice due to its diminutive size and lack of batteries. The fact that it matches well to the RS mic will only give me that many more options in the future.
November 1, 2015 at 10:12:00 PM PST